bite-sized biscuits of wisdom for the soul

♣ The shredder I purchased last week works pretty well, and devoured six inches of documents like a starving Art History major turned performance artist, clocking in at just under five minutes. It also has a setting that lets you destroy CDs and DVDs in seconds, which is both useful and entertaining -- truly a technical achievement on the part of the designers.

♣ At work, my team received a Technical Achievement Award for the five-month sprint we did for our latest release. Ironically, only three members of the team went to the company's "Let's Pretend Christmas is in January" party where the award was presented, since everyone else was too burnt out on working the very overtime that got them noticed.

♣ On Wednesday, everyone on the team received a miniature version of the award -- a peculiarly-shaped piece of glass with our names inscribed. This intriguing yet useless figurine now graces the top of my bookshelf, above the box of breakfast bars and slightly to the right of my Lunchbox Award

. I'm hoping that on the equinox, the sun will shine through my window and refract across the figurine to show me where the buried treasure is so I can retire at 27. 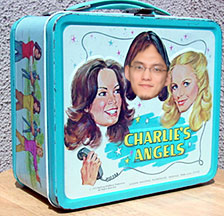 ♣ It's actually slightly to the left (not the right), but I'm writing from the perspective of the lunchbox. If you've never pretended to be a lunchbox, it's an interesting exercise. You really need to get in touch with your inner thermos, but that's just my two cents.

♣ Someone recently sent a check to Verizon for zero dollars after the recent stories of Verizon call center workers being unable to tell the difference between two cents and 0.02 cents. Though I think it's funny, I wouldn't want to publish my name, town, bank, and signature on the Internet for the sake of a joke. I'm sure his funds are getting hijacked as I type this.

. After everyone else braced themselves, the pilot braked suddenly to knock the hijacker off balance, and then a stewardess threw hot coffee on him. This is exactly the reason why airport security is overkill -- nowadays, every red-blooded male and stewardess on the plane is just itching to quash any hijackings or minor rebellions to teach those terrorists a lesson.

♣ After reading up on several plane hijackings as training for my post-retirement career, I've deduced the biggest error they all tend to make: hijackers would encounter much less resistance from the passengers if they just sent the plane somewhere everyone wanted to go. No one honestly wants to be diverted to Cuba or Moscow, but I bet if you told the pilot to fly to the Bahamas with instructions for the authorities to meet at the gate with a case of rum, the passengers would actually aid you. Why fight to maintain your business-class trip to some boring convention when you could get forcibly diverted to a tropical beach where you can woo the native women? Trust me, for I'm an expert in native-wooing.

♣ In fact, my wooing powers are so legendary that I've started receiving e-mail requesting my help with the wooing. I now woo on a part-time basis and the woo income is a nice supplement to my non-wooful day job. I also work for the other side, having created a vacation retreat where the women wooees being harassed by wooers can spend a few days being wooless. I call it Lake Woobegone. 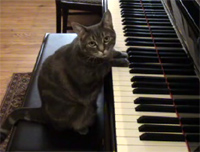 ♣ I'll close today with this video of Nora, the piano-playing cat

. Have a great weekend!

Someone missed the study on sister kissing

I always knew that a geek would make a great husband.