Live* from the Living Room 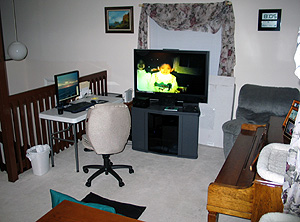 The creative nerve center of this site's daily updates has relocated to a less expensive office space down the hall to facilitate the painting and recarpeting of the old space. From here, I can write updates while listening to my MP3s in 5.1 surround sound, and need only turn my head slightly to the right to watch old home movies or find out who America's Next Top Bass Fisherman will be. This also puts me at a good vantage point of the entire house, and near the front door in case of a sudden grease fire from all the bacon, or a botched kidnapping from one of the many software engineer love triangles I am currently involved in.

And let me tell you, software engineer love triangles may not be as dramatic as NASA astronaut triangles, but they're much more deadly. Why just last week, one of my Java developer lovers trapped me in an infinite while loop and println'd all the reasons I wouldn't go out with her. (I don't remember what happened next because I ran Out of Memory). Last year, another software engineer tried to use pepper spray through my window and carjack me, but thankfully that was during the period where the power window was broken on the driver's side. Sure I had get out of the car and look like a total tool when ordering in the drive-thru or exiting parking garages, but it was a small price to pay for my safety!

Despite the Love Triangle Threat Level being raised to orange in the aftermath of the 2/5 attacks in Florida, my vacation has been going swimmingly. On Monday, I rotated between painting the foyer and playing Zelda, as the mood suited me, and spent the entire evening reading on the couch until the chill in the air made me realize it was almost midnight and the automatic thermostat had kicked into "WTF GO TO BED" mode. 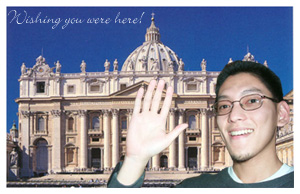 On Tuesday, I took a day trip to Italy and then returned home for lunch at Chick-fil-a, followed by two interesting off-the-radar movies: Idiocracy and Unknown, both of which I've already added to my burgeoning list of goods to review on the next Capsule Review Day. I spent the evening clearing out the office, and even moved the resident behemoth, the American Dream Desk (name composed by Jim Barry), a few feet away from the antique white walls which will soon be a tasty NOUGAT.

The plan for today? There isn't one yet, which is how vacations are supposed to go. When on vacation, you're supposed to roll with the punches and not plan a thing. I suppose it's a good thing that I felt like yesterday was Thursday, since it means my vacation is progressing nice and slowly. I don't know a single thing about the state of things at work -- for all I know, the company could have been bought out by a competitor or relocated to Petropavlovsk in my absence, and I really don't care. I'll probably paint a little today because painting is mindless and fun, kind of like rodeo clowning. Beyond that, I'll do whatever seems like a good idea at the time (the snow outside makes it a good bet that I won't leave the comfort cocoon).

Also, An Hour of Commercials featuring brief excerpts from the hit show, LOST, will be on tonight. The November - February hiatus is finally over, and we'll finally get a rewarding ending to the cliffhanger where Hurley's about to eat Claire's baby. Don't forget to set your VCRs!

*: The URI! Zone is taped before a live studio audience. Plus, it has to be live in a LIVING room.

Teen gets frostbite after barefoot run

Two years ago, Mr. Incredible, Elmo the Muppet and the dark-hooded character from the movie "Scream" were arrested for "aggressive begging"