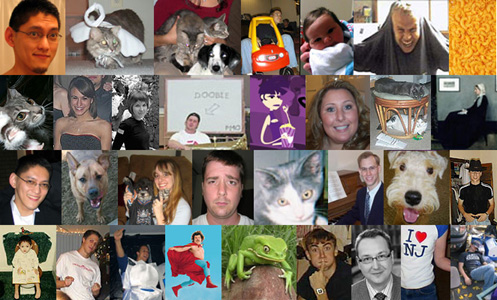 Several years ago, one of the major networks created a documentary about the lives and habits of Nielsen families, those lovable anonymous folks who agree to have all their television habits monitored to determine how many people are actually wasting their lives watching American Idol instead of a PBS special on the Battle of Your Bulge. In a stroke of brilliance, the network aired this documentary during Sweeps Week, and (not surprisingly) every Nielsen family tuned in hoping to catch a glimpse of themselves, sending the scores through the roof.

The URI! Zone does not get any advertising dollars for your continuing visits, but I recognize the usefulness of posting stories pertinent to the audience (stay tuned next week for a Celebrity Deathmatch between Kelley Corbett and Mike Catania, acted out with cats). For today's update, I essentially stole the words out of your mouths -- four and a half years of comments, both inane and profound. I started poking through these comments on Sunday, in hopes of finding a few choice whits of wit, and ended up reading the entire script, from the liberal diatribes of Rachel, to the grammar validation of Finicky, to the non sequitor tangents of Tree before he decided to boycott the site.

If you are bored at work today, or just in the mood for a leisurely dose of nostalgia, flip to a random section of the comments and see if you can remember the post that brought them about (every post is linked for your viewing convenience, but no peeking until you turn in your papers!)

Read what you had to say:

Here are some highlights if you actually do work at your job, and cannot be bothered to stop and smell the comments.

Readers Can Be Funny

Readers Can Be Interesting

Readers Can Be SERIOUS. SERIOUSLY.

October 7, 2004: The Apathy party is a bunch of douchebags

Post some of your favourite quotes in today's comments section!

Police plan to speak to all 200 revelers

The crocodile is armed