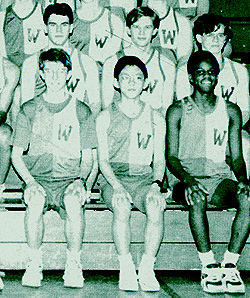 This is me in a 1994 indoor track picture, sitting next to Jay Morrison and two seats down from Ian Schmidt's hair (not pictured). When you don't turn 16 until your senior year in high school, you tend to bike everywhere, and years of criss-crossing the city by bike had blessed me with calves the size of migrating bison. As a sophomore, I decided to put these muscles to use for the good of humanity by joining the indoor track team.

Actually, my reasons weren't quite so philanthropic -- the spring crew team made a big deal out of staying fit through the winter, and I had a choice between running around a heated gym or wearing a Speedo. Plus, there were lots of hot chicks on the indoor track team.

When I joined the track team in tenth grade, I considered myself a pretty good sprinter, and figured I could use the extracurricular time to look good on college applications and meet some new people (high school in Alexandria started at tenth grade, and of the two junior high schools that fed into the high school, I went to the one where students lacked both money and ancestors from Switzerland). I had to miss the first day of practice because my sports physical couldn't be scheduled until that same day, and on the second day I sprained my ankle while doing a "self-timed workout" (a.k.a. lazy coaches) around the Chinquapin circle. It only went downhill from there. 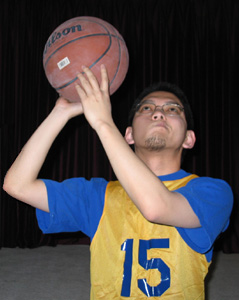 There are several situations in which I am an excellent sprinter and a powerhouse of near-quantum-teleportation speeds:

Unfortunately, none of these situations apply on an indoor track team. When I think sprints, I think "run the length of that football field" or "get away from the po-po", but indoor track sprints come in three sizes: 55 meters, 300 meters, and 500 meters. The 55 is over before you know it, and depends entirely on being a muscle-bound hammer thrower who can fool the starter into thinking he didn't leave the blocks early, and the 500 is so long that you realize you are running in a circle for no reason far before the finish line. The 300 was usually stacked with seniors and good runners, which always left me stuck in the 500.

The good thing about indoor track is that the entire track is only 200 meters long (an outdoor track is about 400 meters long). So, no matter how long your workout is, you are always close to the water fountain when you finish, and you never have to "run home" which is why I never did cross-country. The bad thing about the 500 is that you had to run two and a half laps around this circuit at sprinter speeds. The worse thing is that your entire team is camped right next to the edge of the track so all the cute girls can see how awful you are at the 500 TWICE, and you have no breath left to argue that the 500 is a sprint like The Thin Red Line is a good movie.

Surprisingly, I stuck with indoor track for two incredibly long years. Two years of a coach whose entire teaching repertoire was to shout, "DIG DIG DIG!" as you ran, and two years of lifting weights on sweaty AIDS-infected public-school weight machines to get some sprinter guns. I can no longer recall what compelled me to sign up for a second year of torture, but it was probably a girl.

The only redeeming feature of indoor track was the post-game. When I was a tenth-grader, my sister was a senior, and on the swim team with her friend, Kerry Crowley, who had a car. Every day after an arduous workout, I would cross the street to the rec center and order a massive side order of fries capable of nullifying the entire exercise. Then I would sit in the warm lobby of the indoor swimming pool, eating fries, watching the swimmers, and waiting for my ride home.