Having lived my entire life as a comfortably middle-class individual, my home is filled with useless artifacts that have never actually been employed in real-world applications. Here is a small sample of the obscene wastefulness all middle-class Americans exhibit!

1) Super Metroid / Donkey Kong Country: These are Super Nintendo games that I got in 2004 and never actually played. The first I picked up for $5 online, because it's supposed to be a classic and everyone loves classics. I bet I would love it too, but the Super Nintendo is hooked up in a whole 'nother room, and hanging out in said room is too much of a paradigm shift for me. The second game belonged to Ben, and was secretly given to me by Anna during one of their moves because, "he doesn't even have a Super Nintendo and it's just going to clutter up my pretty house". 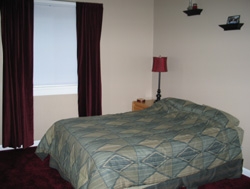 2) The Basement Guest Room: Though my basement room has shown hospitality towards a large and peculiar array of guests, both nightly and semi-permanent (like Eric Barberan, Kathy (nez) Biddick, the Ahlbins, and Tommy Lee Jones), I, myself, have never actually spent the night in it. Maybe this summer I will move down there for a few days to see what all the fuss is about -- one guest described the room as "a little bit of heaven on Earth", but he may have been drunk at the time. 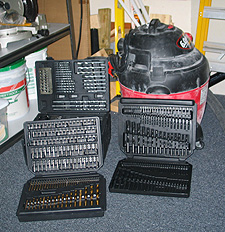 3) Drill Bit Collection: I received a massive set of drill bits from my dad at Christmas 2005, and I put this set next to the two sets of drill bits I already had, intending to use them as soon as the old ones were all worn and used up. Unfortunately in my line of work, there aren't a lot of opportunities for "hardcore nonstop drilling action", so I am nowhere near using up the old drill bits. At the current rate of consumption, these bits will be used for the first time in the year 2015. 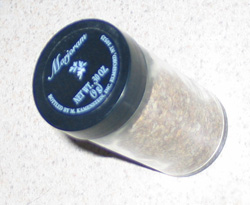 4) Marjorum: It's an unwritten rule that you have to have a spice rack when you buy a house, so I bought a spice rack. Since that time, I think I've used the Rosemary and the Celery Salt. I don't think I am fancy enough to use the marjorum without feeling like a poser, since I have no idea what one might use it as (maybe a butter substitute?). 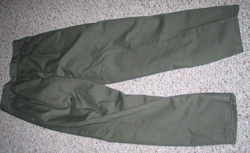 5) Green Pants: In the summer of 2002, I went shopping for nice dressy "teaching" clothes for my sightsinging gig at Florida State. I picked out a pair of khakis and a pair of black pants to accentuate my existing wardrobe of four pairs of shorts, a Members Only jacket, a crew hat, and a muscle shirt with "WHO LET THE DOGS OUT" across the abs. Anna added these pants to my ensemble, because she said I needed to branch out, and I never did wear them. I tried a couple times, but being color-retarded, I could never figure out which shirts went with the pants. Now I am fat and no longer fit in them, but they still hang in my closet.

6) Music Books: This is one of three full shelves of "IMPRESSIVE MUSIC BOOKS" I have to make myself look worldly and IMPRESSIVE. I have never opened eleven of the books shown here, generally the ones on compositional techniques and harmony. Maybe that's why I have a triad fetish!

Runner-Up) Jumanji: The Board Game: In 2001, my dad sent me a batch of randomly selected board games as collateral for the classic board games he had sold at a yard sale while I was away at college. Anna and I played Jumanji just one time, and then never played it again. It was so bad that I think we actually made up our own rules about halfway through the first game. For a board game based upon a movie about a board game where rhinos tear down your house when you play it, this game was largely underwhelming.

The first Alanis Morissette song worth listening to