♣ Congratulations to Anna and Ben who had their first daughter, Eleanor Grace Ahlbin, this morning at 4:41 AM! She weighed seven pounds twelve ounces and was twenty inches long. I do not have any pictures of the nooblet yet, so here is a picture of a twenty-inch trout. If this trout weighed roughly the same as a kid's bowling ball, it would be a good candidate for Eleanor-replacement (in case Indiana Jones was trying to steal her off a pedestal in the hospital). Note, though, that they probably don't look anything alike.

♣ I could be pardoned for mistaking a baby for a fish though. I went to my optometrist on Wednesday afternoon to update my prescription (since there's a kooky Virginia law that says your prescription must be less than a year old to purchase new glasses) and discovered that the glasses I've worn for two years were not quite the prescription he gave me -- the axis was off by 50 even though the hump of the curve was correct. 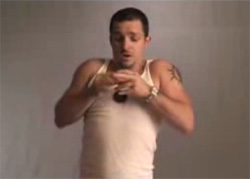 ♣ If you missed the link on Wednesday, here is Alanis Morrisette covering My Humps

. The original is easily in the Top Fifty Worst Popular Songs of the twenty-first century, but the parody and accompanying music video definitely redeem Alanis just slightly, despite her never having looked up the word "ironic" in a dictionary. It's bananas! (B-A-N-A-N-A-S) 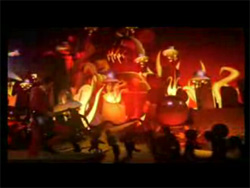 ♣ On the subject of music videos, you can always count on Muse to accompany their great music with the most ridiculous videos that have nothing to do with anything. This video to Knights of Cydonia

could be the craziest music video ever -- it's like Blazing Saddles meets Star Wars meets Firefly meets Kung Fu Hustle. On the other hand, I think the video from Invincible

is especially clever (and even kind of cute) though the song's not quite as good.

♣ My weekend is looking to be pretty busy. Apart from baby visits and grocery shopping, I'll be contributing more to the Paravia Wiki

, and trying to figure out why my website has been flaky for the past two days (you might not even get to see this update for months or even years if they don't get FTP working soon). I also have plans for various birthday dinners and cow tippings and Poker Nights.

♣ Tomorrow is Rachel McKenzie's birthday, the long-disappeared Aussie who used to get into long arguments with Americans about driving and hurricanes and other liberal conspiracies in my comments section. Sunday is Ben Ahlbin and Diana diBiase's birthday. Happy Birthday to all!

Wheelie Bins get you high