and why anyone would care about an unknown soul who sounds more like a tasty French cuisine than an actor. In the aftermath of yesterday's shooting at my alma mater, that post seems eminently discardable.

Thankfully, the people I know directly like my sister, her husband, Zone-reader Jaood, and Anna's sister have all reported in and are safe. In a win for serendipity, Anna's sister was actually supposed to be in class in Norris Hall, but was delayed by a phone call from her mom (who wanted her to see something unrelated on television before anyone knew something was going on).

The seedy underbelly of the crisis emerged almost immediately. CNN provided minute-by-minute updates with casualty numbers shifting in every direction based on whoever happened to be talking at the moment. The news site clamored for any videos or cellphone calls they could get their hands on, and as the death toll went up, so did the magnitude of the nouns. The shooting escalated from a tragedy to a massacre to a bloodbath, as if the reporters realized that every single noun was so sensationally overused that it no longer had any effect. 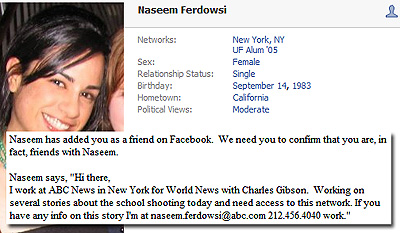 Soon after, I received a Facebook invitation from a tactless reporter trying to get an "in" on the Virginia Tech network, which I rejected, in a manner much more polite and restrained than I originally wanted. Democrats pulled out their gun-control soapbox (which is only about six inches high after so much use) and Republicans all lined up to get their quotations on the air so people would remember that they're running for President.

Over at FOX "News", the reporters were spouting the worst in hearsay and conjecture while continuing to emphasize that none of it had yet been confirmed. After an Asian reporter was photographed handcuffed outside the building, they immediately reported that the shooter was an Asian engineer (luckily for them this eventually turned out to be true, but it was based on the wrong guy). Meanwhile, Jack Thompson, the human scab, was proclaiming on national television that violent video games were the cause, and that the police would probably find Counterstrike installed whenever they found his computer. With every media outlet clamoring to be the scariest or most tasteless, it's amazing that these events can still touch us at all.

Sometimes people try to use these incidents to draw attention to the bigger picture. "How can you care so much about thirty deaths," they argue, "when genocide is occurring daily in Darfur?" And it's true -- thirty deaths are not a big deal in the grand scheme of things, because the world is that full of shit. At least 500,000 Tutsi's were murdered in the Rwandan genocide of 1994. In the past four years, 1,857 minors were murdered in Rio de Janeiro. Child sex trafficking is thriving in Asia, a continent where prostitution makes up 60% of Thailand's governmental budget and an estimated 400,000 prostitutes are children. Parents abuse their children, husbands set their wives on fire, and billions of people live and die in poverty.

When 9/11 occurred, I felt sad for the people who had died, and those who had lost someone. The next morning, and subsequent mornings, I got up and went about my usual business. 9/11 wasn't really on my mind, and I didn't feel like I had any particular personal stake in it. I recognize that this is a defense mechanism -- that if I were to acknowledge just how awful things can be in the world, how much of it is beyond my control, and how ridiculously outside our frame of reference a phrase like "one million deaths" is, I would be crushed under the sheer scope of tragedy. I would loose hope, faith, and strength -- the belief that the world DOES have its good side -- and that is a dangerous thing to lose. It's not that I'm jaded -- it's that I'm doing everything in my power to keep from becoming jaded.

I had been following the Virginia Tech events on CNN.com since the first "Breaking News" item appeared early in the morning. The media first reported that there were over thirty deaths when I was coming home from work. Driving down Church Road with the fifty mile wind gusts and the foreboding skies, I felt a nauseous churning of anger, sadness, shock, relief, voyeurism, and guilt. I can visualize the buildings where it happened. It could have been me, or someone I care about. The number thirty is tangible -- I can picture thirty people. I can see in my mind how many seats in an auditorium that would fill up. I can wrap my mind around the understanding that every one of them had a life story, a family, and a name. And for that reason, it's far more powerful than a mass genocide.

The fact that a "smaller" incident like the Virginia Tech shooting can still arrest the country's attention is a good thing -- it shows us that we still care about our fellow human beings, and that we are not so desensitized to violence and sadness that we can shrug our shoulders and move on. How can you relate to one thousand deaths, or even one hundred deaths, if you feel nothing for thirty, or even one?

The breakdown occurs in how we collectively deal with the aftermath -- we, as a country, delight in playing the blame game. We dig up facts about the shooter or his parents find evidence of his evil. We blame guns and games and then pass empty laws in a symbolic attempt to control them. Already, people are pointing fingers at the university for the second shooting because they should have had the hindsight to lock down the campus faster. (I believe that the response was as good as it could have possibly been, and think the university should be commended). People who are ALIVE and will wake up in their own beds tomorrow are whining that they were kept in the dark during the lockdown, when they should be thankful that the safety plan prevented more chaos and injuries.

Blaming someone or something is a cheap workaround to shouldering any responsibility. Instead of wasting so much energy finding someone to blame, why can't we just let the dead be dead, and mourn with the living? Why can't we let ourselves be sad for the lost lives without vendettas and excuses? Rather than point an accusing finger at the nearest scapegoat, go home and hug your wife / husband / parents / children / cats / dogs. Find the people you love and resolve to take better care of them. I am not trying to paint the shooter as a victim here -- I'm angry that he chose such a selfish way to go, but I'm also sad and not totally surprised that there are souls so full of rage or loneliness or any unhealthy emotion that they believe violence is their only option. If we spent more time healing and watching out for each other, the world would be a much saner place.

So please, if you get nothing else out of today's post, go home this evening and be thankful for the people you care about. Don't take your friends and family for granted, and never feel that you are all alone in this world.

On a lighter note, today is Kim's birthday. Happy 27th!

1: I debated for a long time yesterday about whether to write anything at all about this -- partly because I think that by writing about it, I am no better than all the other vultures I disdain, politicizing an event I have no true connection to for my own gain. The fact that I decided to proceed highlights how strongly I feel about what I've said (that, and the three tortorous hours it took to edit my disparate thoughts into a hopefully coherent statement). I stand by everything I've written here, and hope that you'll forgive the temporary break in levity-inducing posts about cats, Alias, and Les Miserables.