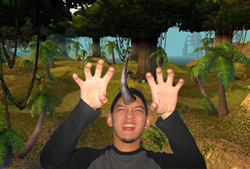 Every young child has a singular fascination at some point in their lives -- a topic that they simply cannot get enough of, that they consume voraciously like a fat sheikh devouring a stuffed camel. My fixation was dinosaurs (RAAR!).

There was a period in my life where I would come home from school and spend the entire afternoon pretending to be an archaeologist in a three-square-yard dirt pile next to the house where the sun didn't shine strongly enough to grow grass. I had dinosaur popup books and picture books lining my shelf. I could expertly sort dinosaurs into Cretaceous and Jurassic and Curvaceous, and could recite the foraging habits of the Diplodocus from memory. 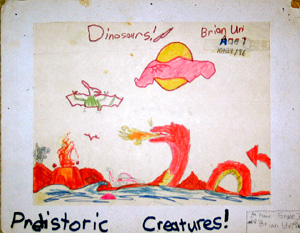 I drew the picture on the right in first grade, and then submitted it to the local Reflections contest the following year. Backed by pure scientific research (and despite the fact that it had two titles, one misspelled, and what appears to be a flame-breathing Loch Ness ancestor in the foreground), I was so sure it would win that I was devasated when it came back without so much as an Honorable Mention. (To ease the pain, I drew my own award label on it, because in bizzaro land, it was worth First Place). 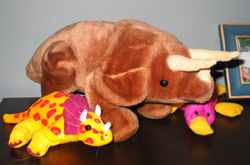 Most of my dinosaur knowledge came from the Smithsonian. Had I been in charge of things, I would have renamed it The Museum of Dinosaurs and Insects With a Bunch of Other Stupider Museums -- we took a trip to the Natural History Museum almost every time I accompanied one of my parents to work in DC, and the Dinosaur Room and Insect Room were the only two parts of the entire complex that I ever cared about. It was at the Smithsonian gift shop that I got my stuffed triceratops -- it was a lot like the Calvin and Hobbes cartoon where Calvin cons his parents into buying all the dinosaur crap because "it's educational".

The triceratops was my "main" stuffed animal throughout elementary school. It never had a name despite my family's attempts to give it stupid names like "Tricer" and "Leroy". Because he was such an important belonging, he endured much abuse in his lifetime -- from having his tail dipped in water and being stuck in the freezer by my sister, to getting stolen on Christmas morning and hurriedly rewrapped as "an amazing present that we just found that Santa left behind!" Somehow, the triceratops made it to retirement without losing any appendages (though the stuffing is a little limp in one leg) and now sits on my dresser, where the worst abuse faced is when Booty knocks it off in the morning to wake me up for breakfast.

It got to the point where even the slimmest connection to dinosaurs would convince me that a particular cereal or TV show or book needed to be purchased and absorbed as quickly as possible. I always tuned in to the Dinosaurs! sitcom with the Not-the-momma baby, and watched Baby: Secret of the Lost Legend ad nauseum. In 1990, Origin released the game, Worlds of Ultima: Savage Empire, and I had that thing preordered nine months in advance. That was probably the longest wait of my life, since my anticipation at playing a game with dinosaurs in it was bubbling over like an unwatched pot of milk and boiling water before you put the instant potatoes in. When it finally arrived, it was a fair to middling game that never fully worked until we upgraded our 386 computer to a 486 the following year.

By junior high, the dinosaur fetish had become extinct and the millions of dollars in dinosaur paraphernalia was relegated to storage bins, top shelves, and yard sales.