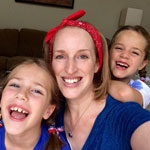 It's because I didn't live in Tallahassee long enough to become an uncultured backwater hick :D
KBS (448 comments)

Man, there's a lot of the country you haven't seen if you think Tallahassee is Hickville, USA.
Beavis (225 comments)

All I got out of that review is that you think some dude you were sitting near is hot.

Your Florida readers aren't the only ones who hate when you talk about musicals.
Rachel (250 comments)

At least when you all hate something, you comment!
Rachel (250 comments)