♣ Less than twenty-four hours after making fun of Reston's personal Light Brite system in my 12 of 12 notes, I drove by this morning to find that all the construction lights were shut off. I guess this goes to show that if you put your mind to it, your website can accomplish anything -- it's not a lost cause!

♣ I thought Wednesday's episode of LOST was enjoyable, and have high hopes for the remainder of the season. I still think the season stumbled a bit with the worthless filler episodes right in the middle -- who cares about a tattoo?

♣ I also called Juliet being a plant the entire time. What would make the story especially interesting would be if Jack, too, had just pretended to be gassed, and was part of some secret plot as well -- his character's all out of interesting plot lines so they might as well screw around with him a bit. Then the two of them could smooch on the beach while fondling his tattoo, and play lookout for the Others. 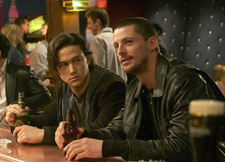 ♣ On Tuesday, we went out to the Fair Oaks theatre to see the movie, The Lookout, starring the youngest son from Third Rock from the Sun, as a brain-damaged janitor caught up in a bank heist. I thought it was pretty neat overall, and Joseph Gordon-Levitt did a much better acting job than he did in Brick. Granted, he didn't really have much to do in that movie except look around (Keanu Reeves style) and stand with the sky in the background. Other pieces of the movie to recommend it: Jeff Daniels as a blind man named Lewis who wants to open a restaurant called "Lew's Your Lunch", and a stripper named Luvlee Lemons.

♣ Do you put lemons in your water? I always do.

♣ Before the movie, Rebecca and I went to the Pei Wei Asian Diner in Fair Lakes II (as if Fair Lakes I wasn't big enough already). They have an entire cannister of lemon wedges placed strategically next to the drink machine. We had the Beef Pad Thai, which was tasty, and the Asian Coconut Curry Chicken, which tasted like a frozen TV dinner. Thumbs up overall, except for the part where the ice machine shocked the hell out of me (literally, not Puritanically). 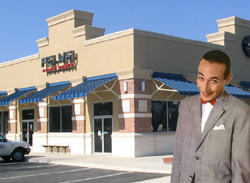 ♣ Normally ethnic restaurants, especially Chinese restaurants, tend to hire people of the same ethnicity to set the mood, but this Pei Wei had a surprisingly high mix of Hispanics and non-Asians working in the open air kitchen. Tragically, I did not see anyone named Hermano -- if they ever hire one, he could have the notoriety of being Pei Wei Hermano.

♣ I don't think I've ever watched any of the Pee Wee Herman movies. I recall occasionally watching the Pee Wee show during Saturday morning cartoons and finding it unsettlingly trippy, much like Today's Special and Pinwheel with that damned nightmare-inducing sonar bird.

♣ You can tell that Pinwheel is not suitable for impressionable children, since the introduction to the show starts with the entire population of Pinwheel-town dying in a chemical gas attack

(God bless YouTube for preserving bits of Americana like this). Even the slightly off-key theme song singers don't survive the attack -- I refuse to believe any real composer would end the theme song the way this one ends.

♣ Speaking of dead people, I've started watching Six Feet Under which got rave reviews from Mike (who hates everything except Led Zeppelin and his dog so it must be decent). I'm about halfway through the first season right now, and though I'm not particularly addicted to watching it, I do agree that it's a very well-acted and interesting show -- it gets better as the characters get deeper, and being an HBO show, character depth is what it's all about. At the least, it's good enough to keep me entertained until the next TV seasons start popping out in May (like The 4400 and Scrubs).

♣ Another thing that's kept me entertained recently is the Gameboy DS game, Puzzle Quest, which is a quirky hybrid that takes the matching game, Bejeweled

, and drops it in a fantasy setting with surprisingly addictive results. I also bought Super Paper Mario for the Wii, which I haven't played very much yet, due to the previously mentioned addiction to Puzzle Quest.

♣ This weekend will kick off April is Bathroom Renovation Month, which will involve tearing out all the old fixtures and cabinets in the two upstairs bathrooms and replacing them with a sexy pastiche of blue walls, white trim, oak wood, and sandy ceramic tile. Sunday is also Angela Oh's birthday, the composer who accidentally got her dog high in 2003. Happy Birthday!

Not allowing ourselves to WILF takes a mixture of planning and willpower.