In the 1997 movie, Conspiracy Theory, Jerry Fletcher tells Alice that he has an uncontrollable urge to periodically go to the bookstore and purchase a copy of Catcher in the Rye but doesn't know why. As a larger life lesson from the movie, I think this applies to all men and their gadgets. We're always obsessed with the latest and greatest doohicky at Brookstone and go through electronics like women go through shoes. I am pretty good about resisting the little voices that tell me I should own an iPod Nano and an iPod Pico, but I'm not completely immune to this gender-based syndrome (see also, my Roland SC-8850

). I can go for months without a new gadget, but once I've finally made the decision to blow my cash on one, I purchase quite quickly.

Having never owned a handheld gaming system since the original monochrome Gameboy (complete with two vertical bars of pixels busted right down the center of the screen), I'd had my eye on the Gameboy DS for a couple months now. I was originally going to wait until the "Nano"-style version came out, but the latest word around the Nintendo water cooler pegged it for a June release, and I could have died in a tragic tuna fish mishap by then. So I picked up a Gameboy DS this weekend when I was sorely in need of a break from Java Certification work (which is progressing right on schedule).

Here is a picture of the DS on the desk in the electronic cortex of my home, the office. To give you something to compare its size to, I have placed it next to a frozen Banquet Chicken Pot Pie. If you are not used to judging size through frozen food products, the Gameboy DS is roughly the diameter of a reasonably healthy grapefruit picked at the height of the growing season in late October. The number and orientation of buttons matches the old Super Nintendo controller, and thankfully uses the old-fashioned cross-shaped pad for directions, rather than the retarded "thumb joystick" that all of today's game consoles employ, which requires such precision when moving that Mario will run off every cliff and be eaten by a mountain lion, even if you compensate for the horrible 3D camera obviously coded by a one-eyed monkey. 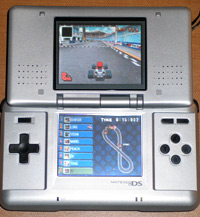 The DS stands for "Dual Screen", because its gimmick is a two-screened fliptop. The top screen shows the action, while the bottom screen provides ancillary information like maps and stats (some games also use the bottom screen as a touch pad and the DS comes with a stylus for writing chat messages over its Internet connection). There were three major reasons I decided to purchase this now instead of four months from now:

I'm sure the DS Lite will be so cool that I'll buy it as well, but I can justify that by giving this one to a friend and then playing head-to-head Tetris all day long at the beach (seventeen weeks left!). In the meantime, I've been taking breaks from coding with Mario Kart DS which is just as fun as the original Super Mario Kart was. I also have Mario and Luigi and Nintendogs shipping out from Amazon, because I have to abuse my Amazon Prime trial membership to its fullest. I purchased Nintendogs because it's gotten great reviews, and I figure it'd be nice to own a dog but never have it jump on me and be able to turn it off whenever it annoys me. Maybe it will also give me dog-practice for Kim, who lives in an apartment and seems to have an insidious master plan to make me get a German Shepherd with visitation rights since she can't own one at her place.

I am onto her tricks though.

Toy planes cause goats to faint from exhaustion

Break the law and live by the beach