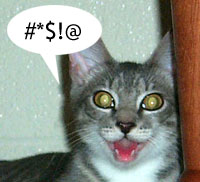 . To me, the context-appropriate use of a swear word is a wonderful thing -- it crystalizes your immediate feelings on stubbing your toe or falling down a well in a universally understood way that crosses all social boundaries. A comedian who delicately inserts appropriate profanity at key points in his shtick is guaranteed to be funnier than someone who tells the same joke without it.

I have no problems with people who swear around me, and don't even flinch at gangster movies which have perfected the art of converting single swear words into every part of speech and dangling participle known to man. Of course this doesn't mean that I swear in front of small children or polite society, because while I wouldn't mind a bit, I know that it's more an issue of other people getting offended. But what is the root of being offended? It's just an ingrained response learned from your parents and your environment that has little bearing on anything relevant. If you flinch when you hear a bad word, it's because you've been taught that the word is bad, even though it's just an arbitrary string of letters and syllables that could have all sorts of other connotations. One of Anna's sisters' toddlers made up an imaginary friend whose name was a swear word -- he had never heard the word said in life, he just put together a word from his imagination and it happened to be naughty.

The best thing to do would be to just let profanity run its course until the naughty words are no longer naughty. All words evolve, and the words that see frequent use are the ones with the most ephemeral connotations. Consider the word 'gay' which started out as 'merry' and became a slur against homosexuality, before becoming a legitimate term to describe homosexuality to the point where dictionaries regularly have this definition as the first one in the entry. Everywhere you go nowadays, you hear people say "[My teacher/my job/playing trmpet/this situation] is so gay", and offended bystanders get up in arms about how denigrating it is to associate homosexuality with negative connotations. I bet that in a vast majority of those cases, the word "gay" has simply morphed into a general-purpose word of negativity and has nothing at all to do with homosexuality, or that person's views on gay people.

Another good example is the word 'rape' which has become universally forged into a word that video gamers use to describe how well they did against other opponents or enemies in a game. "I just raped you in that game of Starcraft!" These kids are not trying to trivialize real rape -- the word just has a branched evolution and they're using a tamer game-oriented version of it. To make a big deal out of it would be as useless as bringing up slavery when another gamer says "You just got owned at NFL Blitz 2001!"

The solution here is obvious. We need to bring back Roseanne, the first show that dared to utter the word, "bitch", on primetime television and write an episode called "The One Where Roseanne Has Tourettes Syndrome". Once Roseanne says every possible naughty and off-colour word out there, all barriers will fall and twenty years later those words will be part of our daily vocabulary. After we've reached the point where there's absolutely no shock value left on television, the world will enter a new Golden Age of Enlightenment and all will be good.

Life is too short to get offended over anything you cannot control.

Does the world really need an Ocean's 13?