Kathy came over on Tuesday night for Totino's Pizza, Booty, and movies -- an ancient tradition originally started in Tallahassee in 2002 when Booty was crazy and ran around in circles throughout the movies. The Pledge was this week's pick because Kathy found it on the shelf, so it was $4.50 cheaper than going to Blockbuster. It's a Sean Penn directed film starring Jack Nicholson that came out in 2001, even though I'd never heard of it before. The movie had great acting, including Jack who is always good despite every role being "Jack playing Person X" instead of just "Person X". It starts out as a crime drama and ends up as a character study, but it's just slightly disjointed. As the ending faded out, it felt like we were supposed to come away with some grand message, but I really couldn't think of one. In this case, I think playing with the preconceptions of the genre actually hurt the continuity of the movie, and the ending Penn provides doesn't really flow from his starting point. It reminded me of an eager beaver math major who tries so hard to prove a theorem and then unwittingly ends up at a completely orthagonal solution that really has nothing to do with what he started with. 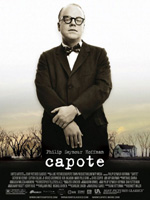 Last night, I went out to Kim's to see Capote at the Shirlington "We Are Incapable of Providing the Correct Showtime In Our Movie Ads" Multiplex, which tends to show artsy flicks and movies that have outstayed their welcome at other theatres. The movie was excellent, and Philip Seymour Hoffman definitely deserved the Oscar he got for his role. His portrayal of Capote made me completely forget that he was acting, much like the leads in Walk the Line. I don't think Caroline Keener's role was really Oscar-worthy though, so I guess it was just a slim year for nominations.

I also had a Cheesy Bacon Cheeseburger at TGIFriday's for dinner. The "Cheesy" part of this burger is separate from the "Cheese" portion. You get a cute little pancake of fried cheese stacked on top of the bacon, in addition to the normal cheese oozing across the meat patty. I thought it was a fish filet at first, though it also could have been a very odd onion ring. Luckily it was none of the above -- extra cheese is always a plus!

A plant that glows when thirsty