The Fun Dip of Internet Culture 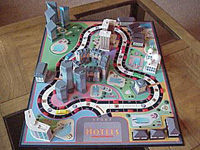 Death is better than a ticket, until you get another ticket

Esteppe said she couldn't imagine a more romantic spot for their wedding.