I had to work onsite at Bailey's Crossroads yesterday so I took the opportunity to stop by my old high school and visit with my former Crew coach (who's also an eleventh grade English teacher). It was the first visit I'd made to the school since 2002 when I offloaded several hundred pounds of "Drum Major Teaching Materials" on the desk of the latest revolving-door band director, who may have been named Josquin, but perhaps it was Palestrina.

T.C. Williams High School from the west looks exactly the same as it did when I went there, right down to the list of State Championships won (which makes the not-so-subtle point that the school hasn't won one in over fourteen years), but the west side is being devoured by a fungal monstrosity that's already taken over the senior parking lot and promises to be the new, bigger-and-better replacement school for next year (if another welding fire doesn't set fire to the entire roof again). My coach's classroom looked the same as well, right down to the "Which College Should I Go To?" student reports hanging on the walls and the plethora of vocabulary words on the chalkboard. It was just like old times, except that I was dressed in my sexy "I'm interacting with people outside of the company" clothes and did not get mistaken for a lost student even once! 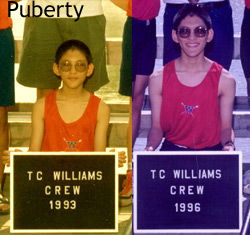 My coach plans to retire at the end of the school year -- he and his wife are selling their Burke house of 24 years and moving to a cozy Bay house with a pier near Yorktown. He expressed his relief that he was finally getting out of the school-biz, because (in his words), "the kids are getting stupider every year. It must be something in the water". He also mentioned that Alexandria's "Laptops for Every Kid" effort was a total bust because all the kids did was check their email and play games through class. He banned them from his classroom with impunity since he's a fossil and on his way out, but said that all other teachers in the school system had to do at least two lessons per quarter (4.4% of the year!) revolving around the laptops, so the school board could say they were being used. In another highly intelligent move only possible through the quick wit of a school board: all students take the Reading Comprehension Standards of Learning (SOL) test on their computer, using a split screen program that shows the text on top and the questions they answer on the bottom. The Writing SOL? They still take that by hand. For some interesting thoughts on NCLB laws, go read Kim's post

. For photographs of Mike looking forward to being attacked go read his blog

After trading war stories about school drama and Crew drama, I said my goodbyes and drove down to Skyline Center where I paid $9 to park for three hours. Parking fees are such a rip-off. I am paying someone for the privilege of storing my car on a slab of concrete where it might get stolen or broken into without liability. At the least, they should wash it for me, or feed it and take it for a walk. This is why God invented company expense reports and gas reimbursement plans.

Girl deters kidnapper with hammer to the groin

Catch a disease and get on Extreme Makeover: Home Edition