Thank God Oscar week is finally over. This year's batch of movies were too tame and not very fun to make fun of. At least I've now done it for a full five years, so I can sell off the entire series into syndication. You'll no doubt be seeing reruns of BU's Oscar Picks, weeknights on TBS Superstation at 7 and 11.


What will happen?
This list is identical to the Best Motion Picture category and in all likelihood, whichever movie wins one will win the other. However, I'll put my meaningful vote on Crash, simply because it must have been a pain in the ass for a director to have to work with so much star power on a daily basis. I bet the only thing worse than corralling celebrities in Crash was doing it in Ocean's Twelve.

Actor in a Supporting Role


What will happen?
Matt Dillon is too funny-looking to seriously be considered for an Oscar, and he wasn't the greatest of the actors in Crash (although he should probably get an honorable mention for cleverness for managing to star in Wild Things with both Denise Richards and Neve Campbell). Of the remaining stars, I'll narrow it down to Jake Gyllenhaal and George Clooney. To determine which would triumph, I secretly labelled the two cat beds as the Clooney Bed and the Jake Bed (since I was having trouble spelling Gyllenhaal), then I let the cats go to sleep. As you can see, there were 1.5 votes for George Clooney and only the ass-half of a vote for Jake.

Actress in a Supporting Role

What will happen?
Rachel Weisz and Frances McDormand are both slightly funny-looking. The world may be ready for gay cowboys, but they aren't ready for award-winning funny-looking people (which is why I haven't won any awards since high school). Of the remainders, I'll go with Catherine Keener because she was good in Being John Malkovich.

Actor in a Leading Role


What will happen?
Jokin Phoenix wins this category hands down. I never really liked him after Gladiator, and then I finally realized that the reason I didn't like him was because he did such a good job being unlikable. In Walk the Line he completely became Johnny Cash, and also taught me the song, Ring of Fire. I wonder how they decided that Jake was supporting and Heath was the lead actor in Brokeback Mountain. I guess they just flipped a coin, or wrestled for it.

Actress in a Leading Role 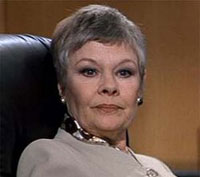 
What will happen?
Judi Dench falls into the "funny-looking" category (as well as the "slightly scary" category, so she's an auto-lose. Of the remainders, I'd like Reese to win, but it will end up being Charlize Theron for tradition's sake. Keira has a few more years of prettiness before she finally dirties up enough to win an Oscar -- but she'll have to think of another role besides a homicidal prostitute.


What will happen?
I am just one man, and a rather small one at that, so rather than continue to fight the tide of favour, I'll vote for Brokeback Mountain to win this category. The only problem with this is that we'll have to endure weeks of insipid news coverage earmarking it as a landmark event in gay rights, or something equally silly. No one said anything about gay hobbits when Lord of the Rings won the first time -- why does this movie winning automatically equate to a deeper meaning than "Hey, this was a good movie"?

You can't force cats to do anything...

Next come the laser beams