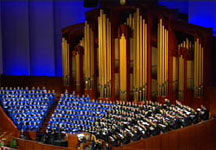 While listening to a CD of the Mormon Tabernacle Choir at my parents' house last night, I was struck by the plethora of nonsecular music that has accumulated over the last thousand years. We have millions of songs and hymns about Jesus and dreidles, angels flying high, and chariots swinging low. It seems like there's a piece composed or invented for virtually every important religious scene or feeling and every religion has a few ditties that you can sing on the street which everyone will join in on. However, there is one religion that, sadly, does not have any uplifting music to go along with it. What is that religion? Scientology!

I thought at first I must be mistaken, because every religion has some variation on the theme of Buddha Loves Me, so I did a quick search of the Internet and only came up with three matches: One Man: A Scientology Music Video Celebrating L. Ron Hubbard's Birthday

, We Are The Auditors -- A Scientology Music Video

, and The Road to Freedom, with selections performed by John Travolta, Frank Stallone, Chick Corea, and L. Ron Hubbard himself

. This is a very sad state of affairs, because as everyone knows, when people are shopping around for a religion to convert to, they always check out the tunes first. If composers don't feel the spirit of the religion enough to put it to song (see also, The Vatican Rag by Tom Lehrer

685KB MP3) then why should any layman be interested in what that religion has to say?

I, for one, would be very interested to hear the workday hymns hummed by the early Scientologists as they rocketed out of the volcano. To fulfill this aural need, I've decided to put my composer skills to work. Here is an excerpt from my first major work, We Shall Overcome Xenu

(138KB MP3). I can't publish any more than this right now, otherwise the Church of Scientology might sue my ass.

The next movement is called ARC of Life and is written purely with a Tone Scale.

SNAKES ON A PLANE!!!: The absolute worst movie trailer of the century