I remember watching cartoons on USA, where the opening animation was a bullet train (maybe the Cartoon Train) choo-choo'ing through the countryside and going through tunnels.

I remember the Nickelodeon station identification commercial where a set of false teeth gobbled up everything on the screen, and there was a different sound effect on each upbeat. The last two upbeats were filled with "Nick" and "olodeon!", followed by a springy sound and laughter. 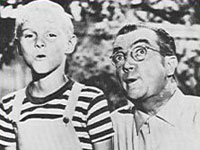 I remember watching Dennis the Menace on Nickelodeon and wholly disapproving of the fact that there were two different actors playing Mr. Wilson. Joseph Kearns was the only good one.

I remember playing at my next door neighbour's when we were both about 4. We were hiding under the bed from her brother and she announced, quite proudly, "I can pee in the trashcan!" and then proceeded to do so, all while hiding sideways under the bed.

I remember falling out of a tree in their front yard, and getting the scar that's still prominently featured on my nose today.

I remember owning Construx before Legos were popular. One day I had to clean up whatever I'd built and I didn't want to, so I threw a tantrum and threw the Construx at the pine dresser, leaving permanent scars in the woodwork.

I remember picking up a cool toy at the Taney Avenue Mile Long Yard Sale which had four compartments and a series of levers that you moved in different directions to make a marble fall through every compartment. It always smelled like vomit, but it only cost me 25 cents.

, or trying to fall asleep in the Nissan Stanza with my parents blaring Phantom of the Opera through the back speakers.

I remember that Senor Don Gato was the only worthwhile song we ever sang in elementary music class, because on the recording there were some ladies who sang the "meow meow meow" part

I remember when one of our pregnant fish died so we dissected it and put it on slides so we could use the new microscope we'd gotten for Christmas. 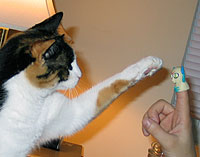 I remember the Fugue Monster, a small rubber finger puppet that Mike gave me after one of Dr. Spencer's Fugue classes in 2003.

Something they don't teach at driving school

Snowman decapitation in the name of progress

Stay out of the army -- get a tattoo