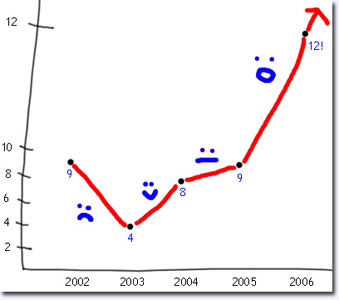 Like a flipped coin that can predict the future, the URI! Zone accurately picked the winner in 12 of the 24 Academy Award categories (you can see the official list of winners here

). This is a marked improvement over previous years -- take that, everyone who didn't believe my predictions!

On Sunday evening, I moseyed on down to a small Oscar party hosted by Chris and Kathy where I filled out a nominee ballot that actually had some sense of internal logic and managed to guess 14 of 24 categories correctly. I only stayed for the first two hours of the ridiculously long ceremony so I don't know if anything goofy happened after that, but overall, my opinion has not changed about the silliness of the whole charade. It's really nothing more than a four-hour circle of self-appreciation. Maybe it would be more meaningful if they let normal movie viewers vote, or got rid of Sound Mixing.

Here are some other thoughts that went through my head during the part I watched:

What did you think of the ceremony? Did I miss any funny moments? Are you just glad it's all over? Let me know in the comments section!

This bike is a pipebomb