1) I remember very little from Kindergarten. I had Mrs. Lovo and Mrs. Wheatley in the morning session at William Ramsey Elementary School, which was just a couple blocks from where my all-day babysitter lived. I thought the school was cool because it had an attached nature center with a beehive in it, and you could watch the bees fly in and out. 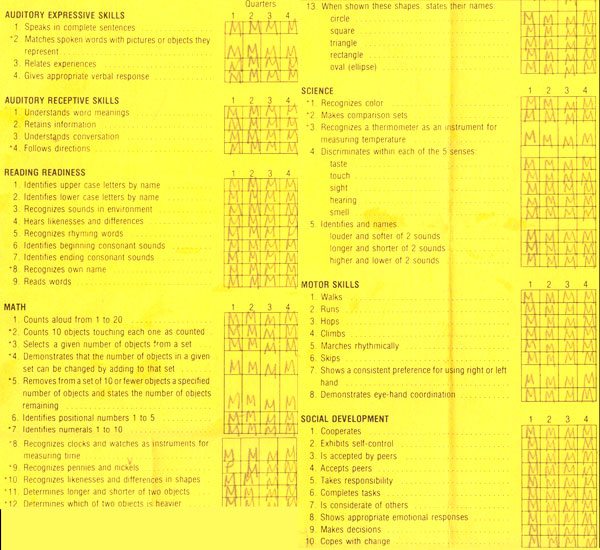 2) As you can see from the above transcript, I was always destined for great things. From the age of 4, I could recognize my own name, recognize a thermometer as an instrument of temperature, march rhthymically, and show appropriate emotional responses. I don't remember if there were actually tests for this stuff, or if it was just day-to-day observation. I'm presuming for the last one, they hit me to see if I cried, and then dropped me in a pit full of snakes to see if I got scared. My one hiccup was during the first quarter, when I allegedly could not recognize a nickel. This is irrelevant in the grand scheme of things because no one uses nickels anyhow. Besides, this shortcoming is nullified by my "Mature" rating in the final category, "Copes with change".

3) My best friend was named Yunus Buluut who moved back to Turkey at the end of the year. The teachers said that we always took over the kindergarten sandbox, but I don't remember this. I had another friend named Gina who was a fellow Korean adoptee. Once, she wrote me a letter in which she said "I love you" so I wrote one back and my whole family made fun of me so I threw a tantrum and tore up the letter. I threw a lot of tantrums back then. Sometimes they would lock me in my own room until I calmed down.

4) I had first grade with Mrs. McClung at James K. Polk school where I went for all of 1-6. It was two blocks from my house, but occasionally the mother of my sister's friend would drive us there (they lived one block away). We always thought the other first grade teacher, Mrs. Kundahl, was cool because she had a house in the woods across the street from school. Mrs. McClung had a card board with all the numbers from 1 to 100 that kids always knocked over, and I would have to hang all the numbers back on it in order, because I could count to 100.

5) I spent most of first grade sitting in Mrs. Uhler's second grade class, where I met most of the Polk crowd I would become friends with years down the road, like Michael Buns and Jennie Geisner. I was scared the first day because she gave a test and I didn't know how to subtract double-digit numbers. I used to play Gertrude's Secret

on the classroom Commodore 64 every chance I could. I had no idea how to play the game correctly, so I just wandered all over the mazes. It was a game, and games in school were such a novelty. Then, I would go home at the end of the day and play the text-based game, Zork I, the first computer game I ever played.

6) My best friend was Jason McCabe who lived in Brookville. We took baths together when he spent the night, although I think we may have been too old for this. Everyone thought Jesse King was cool because he passed out class Valentines that were Origami swans.

7) I was in Ms. Tutt's second grade class for one month. The only thing I remember doing there was creating an ugly paper maché bowl in celebration of Columbus Day. This bowl is still in my basement, filled with useless knick-knacks.

8) They jumped me into Mrs. Hutt's third grade class about a month into the year, because I had already done all the second grade stuff. Mrs. Hutt got mad at me because I didn't know how to read millimeters off a ruler and she thought she was expecting to get some kind of Little Man Tate. She always spelled my name wrong too.

9) Our Language Arts book was called Mystery Sneakers and had footprints on the cover. I took it home one day and read it all. I also read every book by Beverly Cleary, from the Ramona Quimby series to the Mouse and the Motorcycle. I didn't realize she wrote these books in the fifties and sixties until I was well into high school.

10) I had Mrs. Sharkey in fourth grade, although I also went to Mrs. Marmarino for Language Arts, Mr. Hazzard for social studies, and Mr. Cmiel for Family Life. Nowadays, I find it surprising that we were allowed to learn about Fallopian tubes in fourth grade.

11) My best friend was James Houck. His mom and step-dad were very much the archetypical yuppies, though I remember that they always had Coors Light in their fridge. I also had my first crush on a girl who I didn't really know, but who I would become friends with a couple years later (and have more crushes on throughout Junior High).

12) Social studies was always around 11 o' clock, and our lunch period wasn't until 1, so they always let us have snacks during class. I always had those gross fake Oreos that were vanilla wafers instead of chocolate wafers. They came in a variety pack, and my snacks alternated between those, toffee sticks, and Grandma So-and-So's Fudge Brownies. To this day, I recall Social Studies class whenever I smell those Vanilla car air fresheners, because they smell exactly like those gross cookies.

To Be Continued Tomorrow, because Kathy would kill me if I wrote anymore...

Sparrow shot for messing up the world record

Don't rush to kiss a stranger on the mouth or you will end up in a deep sleep.