It's rained pretty much nonstop for the past six days -- that cold, messy cloud spit that isn't strong enough to have thunder and lightning (which would make it worthwhile), but still gets you soaked when you walk outside. The only plus to this weather spell (Nasty Rain Rank 3) is that it gave me an excuse to turn on the heat a few weeks early. Now, for the half hour that encompasses my morning routine of waking up, the house is a toasty 75 degrees. Growing up in my parents' house, the thermostat was permanently set at 68 degrees (because 68 is "room temperature") and there were space heaters strategically placed in major rooms that you had to huddle up against if you didn't want to be cold. Sharing many traits with the noble iguana, I prefer my house to be slightly warmer, so it's usually between 72 and 82 degrees all year around. Here is a list of my morning routine -- it's down to the minute because that's what you're supposed to do when you own a digital watch: 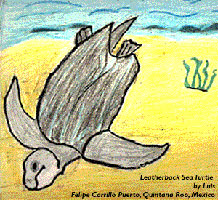 The picture of the iguana was drawn by Brenda, a student at Felipe Carrillo Puerto in the southern Mexican state of Quintana Roo. Brenda has never visited my site, but she is well on her way to being an artistic superstar, as is Luis, who is exceptionally talented at drawing a turtle who's having a head-on collision with a sand dune (or alternately, it's BEVS LTHRBCK and it was holding up the daily ocean commute). Incidentally, I think Quintana Roo would be a great name for a superhero marsupial on a Saturday morning cartoon. It could even be bilingual for all the Spanish viewers.

Because lists are great, especially on rainy Wednesdays, here's a list of cartoons I watched as a kid: 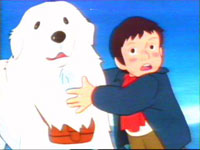 I also watched Babar, Tom Sawyer, and Belle and Sebastian on HBO when at my grandparents' house. These were the first mainstream Japanese-style cartoons in the U.S., where the main characters barely moved at all, had ridiculously large puppy dog eyes, and spent lots of time with one-word interjections like "Huh?" and "Hey!" and "Oooh!" because they meant less work for the animator. I wasn't one of those kids that woke up at 6 on Saturday and watched cartoons until noon -- even back then I was a TV snob and thought most of them sucked.

P.S. putting your bumper in someone's tailpipe is not slang for anything perverted.

This is the best news they could come up with today