A Tourist's Guide to BU's Weekend

Finn and Porter: This is where we had dinner on Friday night and pretended to be as fancy on the outside as we know we are on the inside. Actually, it was very reasonably priced and tasty, and it's about as close to high-class as I've been in a long time (probably since high school prom dinner). The decor was straight out of Pottery Barn, and their wine list was ridiculously comprehensive, taking up the entire back of the one page menu in tiny font. It was even more comprehensive than my Comprehensive List of Types of Sheep1, right down to the $310 bottle of Dom Perignon. I like wine, but am no wine connoisseur, so the house Pinot Grigot went just fine with my Maine Sea Scallops which were so buttery they almost melted in my mouth.

Shopping: Bright and early Saturday morning, I gassed up the pimpmobile that is my 2001 Honda Accord LX (which is also about to break 40,000 miles) and hit Shoppers Food Warehouse for all my bread and Totino's needs, followed in quick succession by Target for sundry household goods, Home Depot for 56 feet of molding, and Costco for more snacks to make me fat at work. Total expenditures: $189. I would make a Mastercard joke here but I find them to be obnoxiously pithy and overdone. P.S., there was an eight foot tall Santa Claus statue that looked like a waxwork in Costco. Over its head was the sign "LARGE SANTA $499.99". Merry Christmas, you filthy animals. 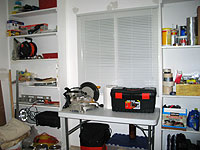 My Storage Room: This is the least seen room in my house because the door is always shut to keep cats out of the circular saws. The door is also shut because a previous cat resident felt it was a good idea to write her name in the snow, where "write her name" is slang for "pee" and "in the snow" is a euphemism for "all over the carpet multiple times", and it would stink up the whole house otherwise (I plan to replace the carpet and redo the room once the guest room is all done). I tidied up the shelves and finally threw out some useless crap like the garish four foot Cat in the Hat that Anna got in some Secret Santa thing and refused to take with her when I evicted her.

Upper Blackrock Spire: Fourteen fellow gamers and I finished this dungeon in World of Warcraft in an uneventful two hour run. This is the hardest dungeon in the game, not including the super-expert dungeons that take twenty to forty people to beat. The boss of the dungeon, General Drakkisath, was beat with an ingenious strategy of one player (the expendable hunter) taunting him and then running several hundred yards away into another part of the dungeon to die while the rest of the group pounded on his bodyguards. I did my standard raid strategy of turning into a cat and typing catty stuff -- this is why we always win (both in the game and in real life).

My Kitchen: On Sunday morning, I woke up at a leisurely 7 AM and played WoW until 9 (and got level 60 on another character). I didn't play much all summer because I had other real life things to attend to, but it's nice to have one more thing on my List Of Things To Waste Time With When I Don't Want To Do Anything On My List Of Things To Do. It's definitely much more fun because you're always playing with other people -- it wouldn't be the same as just a solo game. At 9, I went to the Kitchen and cooked eight pieces of bacon (all for me!) and read the Post. Two stories caught my eye: this one about a marching band who can't play a song about the Devil

. Dying alone and forgotten would suck, so I don't plan on doing it myself, even if it means I have to marry a bag lady (not the paper/plastic variety -- they usually smell fine). I also think that out of all the daily columns in the Post, Animal Watch is easily the most topical, well-written, and enjoyable

Fair Oaks Mall / Brookfield: Post-bacon, I went to the mall with Anna so she could assist me in picking out an appropriate light blue paint to go in the guest room that would match the carpet I bought last week. I then exchanged a shirt at Old Navy. After that, Anna, her sister, and I roamed around the subdivision and through the woods with Baylee the puppy, teaching her how to run through creeks, stop at street corners, and catch illegal immigrants in violation of Fairfax's maximum occupancy laws. Anna thinks she's a setter / pointer mix, not whatever mix I originally posted a couple weeks ago. 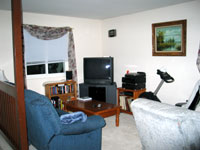 My Living Room: I got Chinese food for dinner (Lemon Chicken, Beef Lo Mein, Soup of Wanton Destruction, and Egg Drop Soup) and then finished off the last DVD of Scrubs: Season One. The thing I like about this show is that it's both hilariously funny and also has a serious, heartfelt angle, and neither one is shortchanged. It's hard to make a sitcom have heart without it coming off like an after school special, but Scrubs works. I didn't finish the Chinese food, but I have enough for three or four meals over this week (there was a minimum charge for delivery, and I couldn't find anyone who also wanted Chinese). After that, I flipped over to America's Funniest Home Videos to see if there were any neat-o cat montages, but it was pre-empted by the Home Makeover show, so I turned off the TV and wrote this entry.