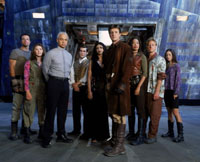 Last Thursday night, we went to see the movie, Serenity, the big-screen adaptation of the cancelled TV series, Firefly. As a fan of the show, I thought the movie was pretty much perfect -- bringing most of the abruptly-ended storylines to a satisfying close. It didn't make the normal big-screen mistake of trying to overdo the story with a big budget (see The X-Files for a good example of bad excesses), and really was just a new episode in the continuing storyline.

This movie is best seen if you've watched the TV show (and there's only half a season's worth of episodes so it's easy to play catch up). Though the first few minutes do a good job of introducing all the characters, their relationships, and the conflicts, you will not get your money's worth if you aren't already emotionally invested in the characters. However, even people who have never watched the series will still be able to enjoy a solid space adventure movie. Overall, I loved the twists of the plot and the way it tied everything from the TV series together. Go watch it and support quality storytelling, because there's something wrong with a world where the DOOM movie is #1 in its opening week

After the movie ended, we stayed through the entire credits sequence so Anna could see if they would play the theme song. At the bitter end, theyplayed the accompaniment, but without the vocals. Anna would not be a Karaoke star for our amusement, so we left without hearing the lyrics.

Speaking of a band of fugitives flying through space with a psychic, here's what I did with my weekend. On Saturday, I finished painting the guest room a light blue (which is not nearly as vibrant and jarring as the illustration would suggest), so all I need to do now is lay the carpet and install the moulding. Then, I will be able to house twice as many drunken wenches when I host bacchanals and bat mitzvahs at my home.

After painting with my peculiar panoply of pastels, I went to the lovely wedding of Nikki and Rod at a church just outside Quantico in Triangle, Virginia. Nikki is yet one more old college friend who has paired up and do-si-do'ed into the married afterlife. It's always fun to go to the wedding of a music major because they place so much emphasis on getting good quality music. No trumpets, this time around, but voices and oboes a-plenty. I also saw many folks from Virginia Tech, divided into three categories: people I knew by name (maybe 3), people I could recognize but not attach a name to (most of them), and people who could recognize me but I'd never seen before in my life (the rest of them). Who will be next to jump on the marriage bandwagon? Kelley Corbett?

On Sunday, I went to a rehearsal in Maryland for Mikado, and played 2nd Cornet on a part that irritatingly rotated transpositions between A and Bb after each song.

Scientists released the Norway rat on the island to find out why rats are so difficult to eradicate.