Like four sticks of dynamite in a placid Oklahoma pond, the music world was rocked on its foundations on October 25, 1981, with the birth of Anna Marie Spellerberg. In her formative years, this future Grammy-winning diva was best known for being a part-time music major at Virginia Tech and performed various unplugged duets with cats on the Vaudeville circuit

(2MB WMV). As a child, she often dreamed of making it big, and possibly transitioning from music into showbiz, starring in a critical box office success with visionaries like Bruce Willis or Frankie Muniz. But it wasn't until she met Booty that these dreams became more than a passing whimsy.

Athena Hornsboot, born on October 25, 2002, and now known by her stage name, Booty, was a musical superstar among cats. Her first great success was choreographing a music video for KC and the Sunshine Band's Shake Your Booty, which she also starred in. As luck would have it, she was touring in northern Virginia when Anna's singing career was in a temporary slump. Booty convinced Anna to quit her dead-end job at a car dealership, change her surname to Ahlbin, and sing on Booty's somphomore CD, Everything is Bootyful.

The CD went on to sell millions of copies, and one of their B tracks, Look We Have the Same Birthday, was the fourth most popular download for the year 2004 on Kazaa. It looked like this was a partnership for the ages, to rival even Rodgers and Hammerstein, or Sonny and Cher, until one fateful day when Anna stumbled across Booty putting the moves on Ben, Anna's husband, in the dressing room at the MCI Center. 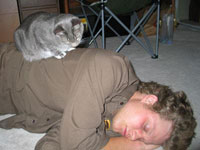 Harsh words were exchanged, and in a sandstorm of tears and catfighting, the musical duo that brought smiles to millions of Sudanese refugees was dissolved. Anna moved to Manassas and began grooming a brand new animal partner for her act while Booty retired in the lap of luxury with her personal groupie, Amber. In interviews, each performer insists the other was at fault, and it does not appear as if a resolution is anywhere in the near future. In the meantime, fans everywhere have cried for more of their musical genius, even just one more song as an epilogue to their brilliant careers.

Would these two former friends ever resolve their creative differences and come together to create another Grammy-winning album? You'll find out after the break, here on

British and U.S. officials said the tour was designed to show Alabamans that diplomacy is relevant to their lives.

A mysterious object turned out not to be a bomb, but a device that was supposed to scare off aliens believed to be living under the ground.

From the People Who Don't Deserve to Win the Lottery file