Welcome to October. It's definitely Fall now -- I can tell because it was chilly when I woke up this morning, Shopper Food Warehouse is selling Halloween pumpkins, and Costco is selling Christmas ornaments. I like the changing scenery and the associated briskness, and the fact that it's cold out, but not so cold that you have to bundle up too much (I hate being cold). This is also why Summer beats Winter -- Winter has good high points like holidays and snow, but I hate being cold so that rules out most common days. Spring is just too wet and unpredictable -- they should just excise that season altogether (maybe they could replace it with another Fall).

Fall is probably my favourite season, followed by Summer, Winter, and then Spring (Rock trumps them all, but even Scissors beats Spring). The one thing I don't like about the Fall is the emergence of mutant crickets in sheds

. Every year I go out to the shed in the Fall and it's teeming with these gross-looking useless insects that do nothing but hang on the wall, watching you, and waiting for you to turn your back so they can gut you from behind. They can easily hop three feet into the air, but aren't afraid of anything you do. I'm going to train Anna and Ben's new puppy to eat them on command.

I kept pretty busy this weekend. In between multiple shopping trips all over the county (I finally picked up the missing set of curtains) and taking care of homebound recuperating toothless invalids, I made some time on Saturday morning to visit the new puppy and watch the Hokies trounce West Virginia 34-17. Baylee is a beagle / border collie mix. Anna and Ben choose the spelling to be unique yuppies, and because Bayley looks like it should rhyme with Péle. When I was in high school, I knew a girl named Gbehlee, so I guess Baylee isn't that much of a stretch. 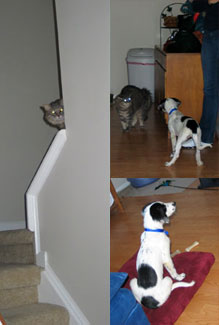 I saw the puppy just a couple days after it had moved in, but it seemed pretty happy with its surroundings. It pooped outside when I was there, which apparently is a big deal. Sydney seems pretty calm about the whole affair and tried to steal Baylee's bone (because it smelled like bacon, and who WOULDN'T steal a bacon-scented toy). When Baylee gets too close, Sydney will get annoyed, but otherwise they chase each other around and act cute together. Baylee farts a lot, so I'm sure everyone will get along fine in that household.

Kitty doesn't like the new puppy much at all, except when it's sleeping and not doing its jerky erratic puppy shtick. She will sit on the stairs watching like a cat-spy, and occasionally come down to put up a good brave face, but mostly she spends time upstairs sleeping (nothing new). I'm sure that after a few weeks, all three of them will be playing some No-Limit Hold'Em for bacon bones and sleeping together in a big pile of fuzz.

I like other peoples' dogs, but I would probably never get a dog myself -- if I wanted high maintenance I would just date a sorority girl. Cats are great because they are the like the end table of pets. You feed them and occasionally play with them and they take care of everything else themselves. Self-cleaning, always sitting in your lap, and they poop in a box -- what more could you ask for?

Marry your Baby Daddy Day, because there aint no apostrophes in the ghetto

Clowns succeeded in distracting the children but apparently annoyed doctors and nurses.