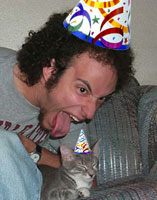 Happy Birthday Mike! This is a picture of you and Booty sharing a good time when you were only 23 and Booty was only 6 months. Now, you're old and 26 and Booty is still 90% younger than you are. 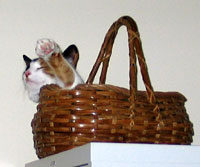 Actually, Mike's birthday was on Sunday, but time stands still in the URI! Zone on the weekends. Couple that defiance of age with the fact that I didn't update on Columbus Day and you have an easy-to-follow recipe for a two-day belated birthday wish. I figure that as long as everyone is growing old, I may as well savour as many national holidays as I can (although I did go to work yesterday, just like any other day). Any illusions that I would permanently remain in the idyllic days of my youth were erased when I noticed that Amber had grown to the point where she could no longer fit entirely into her sleepy basket (Evidence of her growing intelligence include the time she ran full speed towards a desk, tried to leap onto it, and chest-planted the edge). I'm pretty happy that time is moving forward though; I have good feelings about what the future might hold. I used a semicolon in the previous sentence, because I use the double-hyphen far too often -- on an unrelated note, I hate how Microsoft Word converts hyphens and quotation marks into special characters.

Side note: At this moment in history, Amber is sitting atop my bookshelf trying to get the second hand out of the clock. She's all about some stopping time too.

The only time that time isn't flying by is when it comes to processing security clearances. Mine finally finished up on Friday, a mere twenty months after I originally applied. Apparently, the investigation span even exceeds the life of two-sided sticky tape that you put on the backs of magnet boards so they don't fall off your fridge. Having a clearance on file means that I can requisition private vehicles for emergency use or jump to the head of the line for the Big Bad Wolf roller coaster, and I am now taller than the "You must be at least this secret to look at this file" line. However, the value of the clearance on the job market has drastically declined in the past two days, since it was revealed that the FBI is considering hiring more potheads

. Why pay outrageous wages to cleared citizens when you can hire a pothead for a side order of fries and some E.L.Fudge cookies? 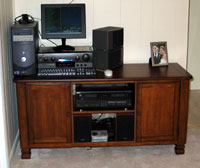 I'm not complaining about the big bucks though, because it allows me to buy first-world necessities such as this entertainment stand to hold my sound system in the basement. It was a Target special (and on sale for $60 off) and, though it may not look like it, it's a do-it-yourself assembly. I love do-it-yourself furniture, because it's like playing with Legos but at a much grander scale. I like the precision with which the holes are pre-drilled and how following the instructions leads to a solid product with very few chances to screw things up. I also think the guy who invented the self-tightening cam (that little metal circle that catches a dowel and grabs it tightly as you twist it) was a genius since it makes assembly require a minimum or grunt work. I may be a little bit crazy.

Those two doors on the entertainment stand hide cabinets which are completely empty. This is a true representation of the rest of my house, which is 55% living space, 10% stored goods, and 35% empty storage space. I love having so much storage space because it lets me organize everything to the o-th degree -- if only I had more useless crap to store on my empty bookshelves, cabinets, and closets, I'm sure the house would be much happier. You don't ever want to meet a crabby house.

Chili before bedtime helps you sleep faster (but not your bedmate)

Squirrels in south London could have become addicted to crack cocaine.