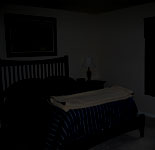 Have you ever been roused out of a deep sleep by a loud noise that's gone by the time you become aware? That happened to me last night -- I woke up at 12:22 AM to silence. I hadn't consciously heard anything, but knew somehow that an incredibly sharp, loud crash had happened somewhere in the house. I was going to blame it on the cats, because Booty has been known to fall down the stairs, Kitty has been known to tip over trash cans with turkey bits in them, and Sydney and Amber just mess everything up. But as my eyes adjusted to the pleasant darkness caused by the lack of street lamps in Loudoun County, I saw that both of my cats were sitting on my beds, staringly intently out into the hallway. I say beds because I have a twin bed next to my full bed temporarily while I renovate the upstairs guest room. It's been in my room and sheetless for over two months now, and sometimes I will nap on it for kicks. Booty sleeps on it at night.

After becoming awake enough to be alarmed, I peeked at the clock to make sure that it wasn't 3 AM and also checked to see that the room didn't smell like burning. I assured myself that I had not fallen into a horror movie about demons and did what any self-respecting guy would do: I threw on some jeans and went to investigate. This is good practice for ten years from now when I have to protect the missus from strange noises in the middle of the night, or cattle rustlers. I'm not saying I'll be marrying a cow, but rustlers are bad news for pretty ladies too, and we all know that I live on the frontier of Northern Virginia.

Booty and Amber decided to stay in bed while I investigated because they are both big pussy cats. I didn't have any weapons handy, so I pulled my thick leather belt ($19.99 at J.C. Penney) from around my waist and held it like a garrotte. I figured I could ninja my way up to any malefactors and choke them from behind, or use the belt like a whip Indiana Jones style. It turned out that I didn't have anyone to beat up, because the noise had been caused by the heavy marker board that (no longer) hangs on my fridge. When we first moved in, we had a heck of a time keeping it up, so finally we coated every inch of the backboard with two-sided sticky tape. Apparently the lifespan of sticky tape at room temperature is approximately one year and seven months, and apparently gravity is still an unstoppable force.

This pointless personal story reminds me of another story in the local news: A martial arts instructor tried to abduct two of his students in the middle of the night, but they kicked his ass with martial arts moves

. The criminal not only taught his targets how to defend themselves, he also got repelled by two 10-year-olds, and then tried to cover it all up by saying it was a robbery gone sour. Personally, I would not have let my kids in his class to begin with -- he's just got that unsettling creepiness about him that would send up parental warning flares from my parental raft. I'm glad he failed though, and I'm also glad the dad got to hit him with a lamp. That's so much more satisfying than just letting the police catch him, and it's what I would want to do if any crazies every came after people I cared about.

A special crate for dogs in the glove apartment allows owners to interact with their pets while driving.

Catholic Church no longer swears by truth of the Bible

I forgot I was getting married today