Every Entry Gets a Title This Week

Last weekend, I got the first e-mail about my ten-year high-school reunion from our slacker-assed Class President, Mike Sharp. If I recall correctly, we actually had co-Presidents, the black girl (Tori) and the white guy (see above), so as to make sure that no one felt underrepresented. This was because we came from a high school that was ever so equal opportunity (a euphemism for "70% Black, 20% Hispanic, 9% White, with special guest star, BU, as the Token Asian #1"). So, Mike got to be the white President and dance with hot chicks (as seen in Figure A) and everyone in the world was complacent1.

I have mixed feelings about attending a reunion and mingling with people I haven't seen in ten years, who are definitely not the same people they were back then. Everyone changes, and usually for the better, but after the standard "How are you? It's been a long time. What have you been up to since high school?" part, there's really nothing else to do but fall back on the old "Remember that time when...?" trick. This is great if, to you, high school was the greatest thing since sliced bread, but otherwise, not so much. I never find myself yearning to be back in high school, because most of the years were not particularly memorable or enjoyable. Though senior year was tons o' fun, with Mrs. Buckbee's English class

, Mr. Esformes' passionate diatribes about the state of the government to disinterested kids who probably weren't planning on graduating, and that Carl Halmo guy running around saying "Fish Fingers" for some strange reason only he knows, I don't really need to relive the rest of it.

They say you should go if only to laugh at the former rising stars who ended up crashing and burning, doomed to spend the rest of their days working the fry station as a double amputee after a particularly harrowing college accident involving Forty Friday and a wheat thresher. Honestly though, I don't think that any of the people I once knew would have fallen so far. I also never had any grudges or nemeses back then, so the news that anyone's fallen on hard times today would just be a disappointment, lacking in the vengeful glee department. I fully expect to go back and just see that people have moved farther along their timelines with no drastic surprises like sex changes or public offices, and as far as I know, no one has died (besides the girl I knew in junior high who was murdered a couple years ago 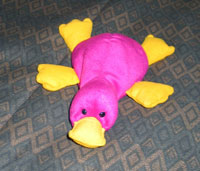 When I was in high school I was not popular at all, but I was very well-known. Being well-known opened just enough social doors so I could have a foot in every caste: I was a band geek from being drum major and playing trumpet, I did indoor track which gave me that HARDCORE ATHLETE!! persona, I did Crew which let me hang out with all the rich kids (despite having gone to the wrong junior high), and I made fun little games on my calculator which surrounded me with a bunch of guys who kept telling me I should write MODs, whatever that was. There was also a sect of the drama department that worshipped me for reasons beyond human understanding. They created a "Purple Platypus Club" which idolized me and then gave me a Beanie Baby platypus as a present (That was a little peculiar, but I still have the platypus on a basement shelf). What this means for a reunion is that I'd be able to recognize and chat with tons of people, but really wouldn't have any deep memorable experiences to share with most of them.

When all is said and done, I'll probably end up going, if only to say that I did. That's the reason I do a lot of things!

1: Apparently the Hispanics were not represented and no one cared, not even them. Vote for Pedro.