, so I thought I'd take today to show you my progress at becoming an ambitious, determined, self-motivated self-starter (with great people skills). The last day of the month is always some kind of throwaway entry, since all my regular readers are out turning tricks to pay rent on the first of the month anyhow.

1) Finish the sidewalk:
Any regular readers will know that the sidewalk saga ended this month, and now a quaint sidewalk engulfs over fifty percent of my house like an Aztec Pac-Man. I still need to create a planter box on the west side that matches the one on the east, but this task was rained out last weekend. Hopefully it will be finished this coming weekend. Outcome: Success!

2) Give a three-part Lunchtime Seminar at work on music:
The Whirlwind Tour of Music has come and gone and about forty people are now qualified to teach music in public schools. Maybe next year I'll do a couple more, so they can become tenured professors. I will probably never do three in a row again though. Outcome: Success!

3) Start playing trumpet regularly again:
With the exception of 4 - 5 days, I've practiced for a half hour daily all month. I hate the boring parts of practice so I spend more time playing through songs. My tone isn't where I want it to be yet (starting fresh on a Schilke 15 mouthpiece), but I have the endurance to play straight through the Ewazen, and my high range came back quite readily. Outcome: Success!

. I never went to the oral surgeon about my wisdom teeth though. I figure they can pry them out of my cold dead body, since death is probably a more effective anesthetic than any dentist-prescribed gasses. Outcome: Success!

5) Resurrect Poker Night / Keep Poker Night Alive:
We've played poker every week except for one of them, and I've won once. We have enough people now where we can get a good crowd every week. In fact, we generally have to only invite people certain weeks so there's no gigantic million hour games going on (we do themed nights, such as "All Hokies", or "Ben's Extended Family" or "Anna's Immediate Family, Set 1 of 8" or "Good Friends From High School That I Only See On Poker Night Because I Never Keep In Touch With Them"). I hope that one of these weeks we do "People Worse At Poker Than I Am". That would be fun, at least for me. Outcome: Success! But No Profit.

6) General Goal - Exercise regularly:
I do sit-ups, push-ups, and a minute amount of biking every day, except on the days where I'm shaping concrete, doing yardwork, or moving other peoples' crap. And boy, have I moved crap this month! Outcome: Success!

7) General Goal - Cook real food more often:
I have decided that cooking real food is useless if you are only cooking for yourself. I have not bought raw meats (excluding hamburgers and hot dogs for festive barbeques) in months. If you want to help me achieve this goal, you need to come over for dinner and I will cook up a storm. Outcome: Failure :(. Blink tags are so annoying. I wish they were still part of the HTML standard. My entire page would blink just to piss you off.

8) General Goal - Make more of an effort to keep in touch with the old people and the new people:
There was a time when I would not leave a five-mile radius of my house or apartment to be social, and never initiating hang-outs on my own unless I didn't have to go anywhere. Nowadays, I do a much better job at e-mailing people I haven't heard from in a while, visiting old friends, and meeting new folks. Traffic cameras have spied me making the thirty-mile trip to Alexandria and its nearby environs not once, but multiple times this month! Ask anyone who knows me well and they'll confirm that this is something of a mini-miracle, on par with pre-cooked bacon or the discovery of an Eleventh Commandment. Outcome: Success! 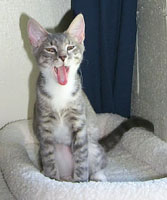 So as you can see, I have successfully completed 7 of 8 goals for the month of August. I'm off to a good start! For the month of September, I'd planned to do the following:

I've already sent e-mails to a few band directors I used to work with to see if they have any composing/arranging work for me. If that doesn't pan out, maybe I'll write some fun mainstream jazz charts. As for Zone improvements, I did all those in July, so that can be checked off the list. Since I also shake Booty on a regular basis, that leaves me with just one Thing To Do this month. I guess I could add "Turn 26" but there's not much work involved with that. If you have any ideas for suitable ambitions for me, please share.

If a man wanted to wear a cowboy boot - that's the foot he would want.

According to witnesses, the woman was laughing hysterically as she got into a car that was waiting outside with a driver.