For the life of me, I could not decide what to write about today. I didn't get home until late yesterday, having spent the afternoon sitting in a freezing lab watching automated tests run on a computer I didn't have clearance to touch (easily more boring than watching snot climb up a wall), and I had very little patience for sitting in front of another computer to be creative. I bought an esophagus-clogging quarter pounder with cheese for dinner (it's such a bad idea for me to ever carry cash anywhere) and found that the price has risen by thirty cents, just like the half-tank of gas I used up today in the three hour jaunt through northern Virginia. 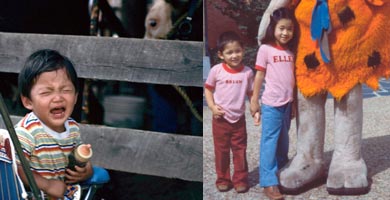 For inspiration, I wandered around the house doing random tasks, like taking pictures of the cats. The portaits above are what my cats would look like if you were a very brave mouse standing on your back paws. This gave me the idea of creating some kind of photo-blog entry today, using pictures my dad sent me recently. The picture on the left is of me in 1981 at the 4H Fair. I had just been sneezed upon by a cow and apparently this was not good for business. The picture on the right is of my sister and I with Fred Flintstone. Apparently Fred had some kind of viral meningitis spawning on his right foot. You can also see the iron-on knee patches inside my pants, doing their very finest "George W. Bush's Coat During a Debate" impression.

If that were the whole update, it would suck, much like this update did:

. The new URI! Zone is not allowed to suck anymore (your mileage may vary), so I went online to get ideas from the myriad of BU's denizens. I know some pretty smart people, so I figured they would be able to combat this paucity of wit:

Internet 1, BU 0. Since it didn't look like inspiration would be arriving on my doorstep, I gave up. I will leave you all with this story from my youth in lieu of a real update:

When I was in elementary school, sit-ups were part of the Presidential Physical Fitness Test. These were the old-fashioned hands-behind-the-head situps, not those new age arms-across-the-chest ones. Kids would pair up and see how many situps they could do in one minute, then hold the feet of their partner. One year, I was paired up with a kid named Tony, who decided that he would be the first person to break the school record, which was 70 situps in a minute or something ridiculous. He cautioned me to hold his feet as tightly as possible so he didn't slide around on the foot-flavoured rubber mat. I braced him like I was plugging a hole in the dike, the whistle blew, and he was off!

Now Tony had neglected to mention the fact that he'd had baked beans or some similar entrée for lunch. From the start of his very first sit-up, he was painting the elevator like nobody's business, and each expulsion of effort to reach a sitting position was musically accompanied by a contrapuntal line of Fart. His consistency was quite commendable, since he was able to accompany roughly two-thirds of his sit-ups with the musical saw. Kids on either side of him interrupted their workouts and rolled out of harm's way with cries of panic, but Tony was a boy on a mission in a foreign land of sights and smells (but mostly smells).

As promised, I held his feet to the bitter end. Or not so much bitter, as piquant, as only a swirling miasma of poo in the morning can be.

Boys sell themselves into slavery to mom


Yesterday's search terms:
rhino pee wmv, verizon eats poop, you have between your legs an instrument that can provide pleasure to thousands yet all you do is scratch it, showers in ambler johnston, barnyard tv