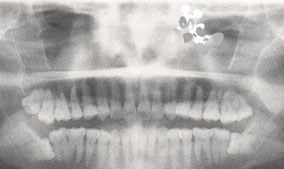 My trip to the dentist yesterday was uneventful and exactly like every other trip in my dental repertoire (although they did locate the Mickey Mouse pendant I lost in my nose at age 15). The visit began with dirty looks and voodoo curses when I explained how long it had been since my last confession cleaning, and the orderly donned her thickest "we're going to find a dead muskrat behind his left molar" latex gloves.

Normally this would alarm me, but I've lived with my teeth for a pretty long time now, and we have a reasonably honest relationship with each other. Icebergs have moved faster than my teeth in the past ten years. My former dentist, Dr. Lasky, thought it best to leave the wisdom teeth in until they started causing problems, since taking them out might drastically shift my trumpet embouchure for no health gain. I mentioned this yesterday and their diagnosis shifted to point out that there were cavities back there. Then I pressed a little further, to find that actually it was just that cavities were likely to appear there without proper care.

Based on this information, I have created a playbook describing what the evil sideways wisdom teeth plan to do to bring about destruction in my mouth:

The next step in the dental procedure was a pamphlet, titled "Everyone Needs Fluoride!", which I was supposed to read immediately. The pamphlet, no relation to the classic book, "Everybody Poops!", was five pages of "the dangers of not getting enough fluoride", followed by an advertisement for the pharmaceutical company that made the pamphlet. Not surprisingly, this was followed by an offer for an extra dose of fluoride ($30, not covered by insurance) which I declined. The cleaning was quick and painless although someone really needs to invent two things: dental tools that don't sound like power tools, and tastier cleaning solution. I left with a fridge magnet, a toothbrush, a referral to an oral surgeon for wisdom teeth removal, compliments about my unnaturally straight teeth, and an admonishment to come back in six months instead of six years.

What do you, the dear reader, think? Should I get my wisdom teeth extracted this year? In order to get a second opinion from a licensed professional, I consulted with my local oral surgeon at the McDonald's on Sterling Boulevard. He prescribed a 10 piece Chicken McNugget meal, and I have to say that it was quite tasty. That's my kind of oral surgery.

Buzzi she said she'd been given no explanation. "I think I'm going to pass out," she said.