A Tribute to Jerry Fletcher

The Endgame
Hurricane Katrina was staged by a mad scientist / evil entrepreneur as a way to humiliate the Corp of Engineers and end the war in Iraq.

The Facts
The Warrior Group

is a women-owned company in DeSoto, Texas, which creates modular office furniture. A few years ago, they had twelve million dollars worth of contracts to create modular barracks for the Corp of Engineers. The employee who was the contact for this particular contract was named Bob Vanhorn.

Bob Vanhorn is currently the operating systems manager for The Thriller, a high speed catamaran which can hold 40 passengers in George Town in the Bahamas

Katrina eventually came ashore near New Orleans. Because the hurricane was not a direct hit, most of the damage came after the fact, the result of levees which could not sustain under the chaos of the storm.

Filling in the Blanks 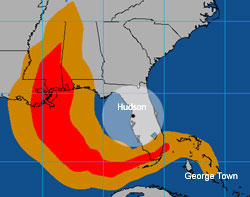 In 2003, funding to the Corp of Engineers was cut to support the war in Iraq

. The Corp of Engineers had to plead for emergency funds and divert funds from other projects to continue work on the Lousiana levees. Obviously, Bob Vanhorn was fired from the Warrior Group because the Corp defaulted on their payment for the modular barracks and he was to blame (not being a woman in the women-owned company). Because of this, he began nursing a grudge against the Corp, Louisiana, and the war in Iraq.

Bob Vanhorn moved on to the Bahamas where he perfected a whirlpool machine (disguised as a tourist attraction, the Thriller), which could generate hurricanes when used in tandem with various electronic devices (perhaps the Lightning Bolt gun mentioned here a couple days ago? Continuity!)

As Katrina became a hurricane, it made a concentrated effort to avoid the city of Hudson, FL. One Bob Vanhorn is listed in the phone book for that city

. Obviously Bob did not want to damage his own town, but needed his pet hurricane to reach Louisiana.

Bob's controlled hurricane intentionally veered east of the city of New Orleans, so most of the blame could fall on the Corp of Engineers and their failure to maintain the levees.

In the wake of the hurricane, gas prices have skyrocketed, jumping twenty cents yesterday in Sterling, Virginia, and probably climbing more today. Gas rage is climbing, with some drivers killing gas station owners

As a result of this, President Bush will have to reallocate funds to the Corp of Engineers which means he can no longer afford to sustain the war. Men from the front will also be needed to patrol the disaster zone and to declare martial law at gas stations. The Corp can finally pay the Warrior Group after an object lesson of what happens when you don't pay a Vanhorn, the war will be over, and Louisiana is well saturated. Bob Vanhorn has achieved his three-part revenge!

Erin Booher said she became suspicious when Walters said her heart had stopped at the hospital.

If you are there at a gas station and someone is beginning to lose it, back away and get out of it