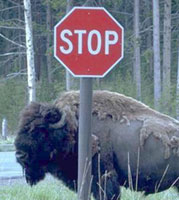 To give you an idea of how strangely my brain is wired, here is a cautionary tale. I went to Ruby Tuesday for dinner on Friday night with Anna, and we noticed in the menus that they served bison burgers. Anna commented that it was a rather peculiar meat to make a burger out of. In the span of less than three seconds, without prompting and without conscious choice, my brain had begun searching for a punny comment to make about bison, narrowing down a wide field of mediocre contenders to a play on words of "bison-tennial". From that point, the rogue faction of my brain immediately began searching for casual words that sounded like "tennial". By then, the rest of my brain had figured out that some neurons were working off the clock and pulled the plug on the whole venture. I think the neural networks inside my brain have created a lookup table of every word I know for quick reference when it comes to making up puns. Luckily for me, people in my neck of the woods respond to puns with groans, rather than stabbing me with a red-hot poker.

Speaking of poker, I came in 5th out of 8 on Saturday, which is a more affable way to say that I was a loser (but just for that night, of course). I've posted a few pictures on the Photos page

. Tom ended up walking away with the big bucks, and Kim and Rosie, the first-timers of the night, ended up in 3rd and 4th place, As is customary for Poker Night, there were tasty cookies for eating and the final hand was decided on the river. Anna, who took second place, always seems to go out on great hands that are killed by the river. In the interests of remaining alive, I did not tell her to "cry me a river". She probably would have shot me.

Speaking of shooting people, AudioBully's remix of Shot You Down is horrible

(411KB MP3). I've never understood the whole concept of the remix -- why does every popular song need to be resampled with a thumping bass line for dancing? I don't think the world is necessarily a better place because you can go to a rave and gyrate to Theme from the Godfather. There are very few remixes that are actually worthwhile to listen to -- most of them tend to ignore the interesting parts of the original songs and overdo the whole rhythmic vamp idea. Among other bad remixes I've heard recently are the remix to Kylie Minogue's I Believe In You (which doesn't even use the chorus of the song), and pretty much any remix by the Chemical Brothers.

What's worse than a remix though is a remix by the original artist. There's a short, inane song by Spice Girl, Emma Bunton, called Crickets Sing for Anamaria which is notable only for its planing chords and Latin rhythms. The song is less than 3 minutes long, which is a smart move because there's only about three words in the lyrics and the last half of the song is dominated by people coming (to the scene)

. Not content with having a catchy but ultimately useless song, it was remixed as an insipid five minute extravaganza which sounds like nothing more than the parts of Tequila which were scissored out of the sheet music, pooped on, and burned on the mixing room floor. Another useless remix is Eminem's remix of Sing for the Moment where he sings the exact same lyrics to a different beat

In my years as a composer, I only ever made two remixes. The first was of Florida-Alex singing solfége to Eminem's Lose Yourself. The second was a club dance remix to Jaood singing The ABC Song. It was a critical success, if not a commercial one, and you can hear it in its entirety here

Related to remixes but infinitely better are mash-ups. A mash-up is a mix where you combine elements of two disparate songs into one, resulting in some very cool musical effects. One of my favourite mash-ups is this theme

(469KB MP3) from the third season of The Sopranos, where the Theme from Peter Gunn is mashed with Every Breath You Take (I first mentioned this song back in 2002

). The juxtaposition of the two really makes sense in the context of the scene, where gung-ho FBI agents are overzealously tailing the Soprano family. Another good mash-up is this old one of Coldplay's Scientist with Sum 41's Pieces

(596KB MP3), though it really sounds as if Sum 41 just ripped off Coldplay's chord changes. I've also heard some ridiculous mash-ups, like the one mixing Eminem with the theme from Bob the Builder. That one sucked.

Speaking of things that suck, some clown from Poker Night left several bottles of Mike's Hard Lemonade in my fridge. But wait, it's Cranberry and Lime flavoured! And it sucks! Remixes never work when they involve bottled alcohol.

There was some drama this weekend with site slowdowns and missing updates. My site has now been moved to a faster server, so all the problems people noticed on Friday and Saturday should be a thing of the past!

So, imagine you're the poor person who decides not to evacuate: Your house will disintegrate around you. The best you'll be able to do is hang on to a light pole, and while you're hanging on, the fire ants from all the mounds -- of which there is two per yard on average -- will clamber up that same pole. And, eventually, the fire ants will win.

The Scream of Liberty