I would say that my weekend was pretty hectic, but my outlook on such things might be skewed. Having long ago relinquished the title of Social Butterfly of Loudoun County, I consider any weekend busy if I go outside the house more than four times in a single day (bonus points for getting in my car and driving somewhere. Beep beep, monsieur!) 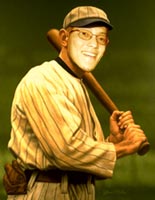 On Friday evening, I cleaned the house and recorded some music examples for my presentation, and then Jack came over for some miscellaneous socializing. Saturday's opener was my typical shopping gambit, where I hit the gas station and the grocery store, pissing off the clerks by getting more cash back than they have in their drawers at such an early hour. I then went to Costco for assorted meat products, followed by Rack Room Shoes for new sneakers. The shoe store turned out to be closed, so I took it as a sign that Saturday-shoe-shopping was not in the cards and went home. Of course, I could have waited around for the mere 20 minutes until opening, but that would be far too logical. Procrastination is in my blood and I am still shoeless.

Florida-Kathy packed up and moved out of the basement Saturday afternoon, so my home is once again squatter-free. I think she stole my hand towel out of the bathroom though. Thief. Around 5, I went over to Chris' in Ashburn to play a $20 poker game with Richard and Chris' friend, William (Chris and Richard were a few years ahead of me in marching band at Tech). Five hours later, I was in 2nd place (which is equivalent to last place when it's winner-take-all). From there I dove into the Bootymobile and hit Anna & Ben's house in scenic south-side Manassas for a second game of poker. I got there too late to jump in, but I did get to deliver my patented FOB chocolate chip cookies (F.resh O.utof B.ox). It's just not Poker Night without my cookies.

On Sunday, I went to Subway for lunch with Kim, who was up in the 'Ling volunteering at Petsmart to clean dirty kitten cages (but really just looking for Booty-rific kittens to steal). I got the 6" Cold Cold Trio on white, which has recently been renamed as the Cold Cut Combo. I think this means they added a piano player, but I couldn't taste any difference. Sunday afternoon was marked with a barbeque for my sister's 29th birthday -- her husband, Dan, and my parents came out as well. Amber stole a Tostito out of the bowl, and also sat on the birthday cake. There was plastic wrap on top, but her inherent gravitational force made most of the words and the frosting come off with the plastic. Incidentally, look at how good I've gotten at dropping the names of the people I associate with -- I like to think of myself as a figurative crossbow bolt of association on a critical trajectory of intersection with the lives of innocent bystanders. (The heck?)

While over at Chris', I was reminded of a fellow who I hadn't thought about in years. Mike Saunders, who everyone called "Hubcap", was a freshman trumpet player in the marching band at Tech in 1998. His name was always on everyone's lips and he was very well-connected for a freshman. The section leaders initially had misigivings about passing his audition because he was some kind of triple major, which meant that he wasn't at practice often. Luckily, he managed to get in as the 64th trumpet (the section was always capped at 63). Hubcap was a stand-up guy and even people in the other sections of the band liked him. He threw great parties, which culminated in his inclusion in the MV Trumpets Slot Machine (3 Hubcaps was worth 10 bottles of Gold Bond). 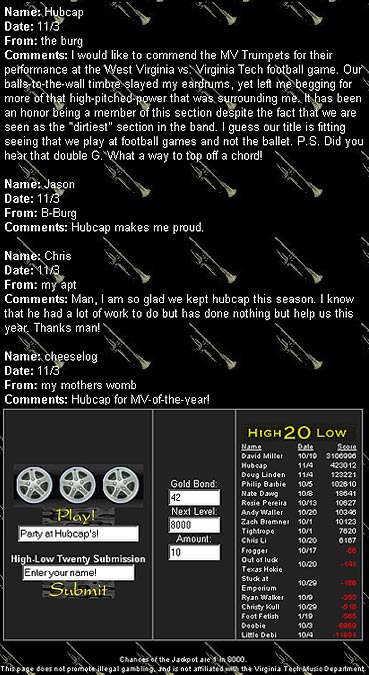 By the end of the 1998 football season, Hubcap was so popular that he got the award for Outstanding Freshman in the marching band. Unfortunately, he transferred to another school after his freshman year, but even years later, people in the band would always talk about "that Mike Saunders" guy.

So what's the punchline? Mike Saunders did not exist. Mike Saunders was the product of a bunch of bored trumpet players on an Abbott bus to northern Virginia. His name quietly appeared on the trumpet rosters and then everyone made a point to drop his name in any appropriate slot in the conversation. Ridiculous party busted up by the cops? "Yeah, I hear that Hubcap herded all the underagers into a closet so they wouldn't get caught." Someone steal a giant trash can with Vanderbilt University etched on the side? "Hubcap told the field crew he was on the Vanderbilt staff and they believed him, even though he was in a band uniform!" Someone playing the Hokie Pokie four octaves too high? "Sorry, Jay, it was Hubcap."

By the time the embarassing Music City Bowl in Nashville had come and gone, Hubcap was a household name, there were regular sycophants in the woodwind sections who claimed to be his best bud, and the band directors occasionally remarked that he wasn't at practice very often. His lack of attendance was blamed on his 25 credit courseload and the fact that he was constantly travelling to other universities as part of the University Outreach program. I'm reasonably certain we didn't have an Outreach program.

How did Mike Saunders get the Outstanding Freshman award? It's simple math. In a band of 330, the trumpet section was the largest at 63. Hubcap got 20% of the vote without contest, and probably more since we were actively telling other sections to vote for him if they couldn't think of anyone better. Unfortunately the endgame was nullified when word leaked out at the Band Banquet. Before Hubcap could be announced in the awards ceremony, the director had removed the "Mike Saunders" plaque from the trophy and awarded it to the freshman who had been a distant 2nd.

In honor of Hubcap, I have resurrected the 1999 Edition of the Slot Machine

-- it's an old-school mutation written purely in JavaScript which you can play at work when there's nothing better to do. Fun fact: David Miller, the all-time high scorer with 3106996 bottles of Gold Bond sat in his room for hours on end, clicking on the Play! button. For his single-minded devotion, he was given the nickname "Jackpot" in marching band. Another fun fact: The internal JavaScript code for a Jackpot is "222".

The message is fine; just dial it down a little.

Oops, how'd that get there?


Yesterday's search terms:
what do you do when you're cooped up in a hotel room between shows, tc williams prom 2004, diarrhea cartoons and pictures, cats with maggots, fried chicken .midi