In my lifetime, a new type of store has gained prominence: the store with everything you never needed. You walk into one of these bazaars to discover things you never knew existed but which you can't possibly live without. A case in point is the squat metal box currently anchored to the side of my cabinet which I found at Bed, Bath, and Beyond for a mere ten dollars. You can stuff it full of plastic bags after you're done unpacking groceries, and then you take them out the side whenever you need a bag in the future.

I'm not sure which is sadder, the fact that I have a store-bought container to hold containers mounted on a container, or the fact that there's a smaller variety hanging over the litter box specifically to hold bags for scooped litter. That one is made of cloth with a hole on each end, making it a queue instead of a stack (because, God forbid you reuse the newest bag before the oldest one). I guess the saddest part is that I like my container containers, and would buy more container containers if I had a use for them.

There can be too much of a good thing, however, and it's clear that not everything you find in these stores will revolutionize the way you live. Take, for example, the Pet Stroller™ which you can own for $130 at Bed, Bath, and Beyond

(obviously falling squarely in the "Beyond" category). I have a feeling any cat you put in there would freak out from the vibrations of the wheels on a sidewalk, and any dog would get laughed at by all its dog friends (unless it had no legs, and really, a dog with no legs is not so hot anyhow, unless it's in a bun). Luckily the Stroller comes with a fabric-enclosed area for privacy so the dog could hide in shame. The cat would just use this area to express its displeasure fecally. The ad copy mentions that you can also use it to haul groceries and laundry. This might actually be useful in far off lands where cats are kept as collateral until you pay your laundromat -- go in with a cat, come out with your dry cleaning (I call it meow-ney laundering). 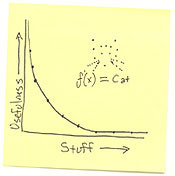 The king of crazy-crap stores is Brookstone, a store which most savvy shoppers exploit as a quickie massage parlor in their shopping mall routine. Their ratio of stuff people actually buy to stuff that will end up in an infomercial rapidly approaches zero as their inventory goes to infinity (see figure A).

. Stick it in your grilled meats and it will tell you when to return, up to 300 feet away. This means that you can fire up the grill in the endzone and still run the ball back for a touchdown. No more grill-related touchbacks required! On slow days, you can take the belt pager to work, pretend to answer it, and excuse yourself from meetings because "my meat is calling me". The thermometer can only say two phrases though, which is something of a disappointment considering the costs. I would have expected it to warn people about the hazards of eating red meat, or at least recite a dramatic monologue from the 1992 movie, Le Steak.

Another item in stock is the Remote Control Key Locator

. Now, locator devices in general are pretty useful, and I've used the handset locator on my telephone many times (once I found the receiver in the trash, but that was Anna's fault). Perhaps I'm just far too organized for my own good, but I'm thinking that if you need a device which tracks four separate objects, you really need some organization in your life instead. Not to mention that if you can't find the hub, you're four times as screwed. 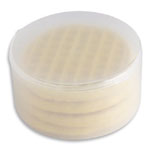 Speaking of organization in your life (my segues are so smooth that even Bush couldn't fall off one), we have the Container Store. I will be the first to admit that I've never even set foot in a Container Store, but Kim sings its praises regularly, so I figured I'd see what all the fuss was about. I browsed their online store and I have to concede that it's an organizer's paradise. Have you ever stored an opened bag of Eggo waffles in the freezer only to find that ice has made them soggy? Well you can now prevent that with a $2.50 "Frozen Waffle Stay Fresh Container". A search for "Stay Fresh Container" reveals that their store has fifteen different types of container for various forms of decaying food

. You might never need to eat leftovers again -- just leave them in the fridge indefinitely!

Every store has its sketchy underbelly though, and the Container Store is no exception. What's wrong? Well, they sell trays that make funny-looking ice

. The trays are scary because they look like torture devices for lab rats, and if I saw that ice at a dinner party, I would feel compelled to reform the ice into the shape of the tray, like in that old Game Boy game, Daedalean Opus. That could just be me though because I doubt anyone else in the world bought that game (I also owned Milon's Secret Castle). Either way, you all can enjoy your funny ice cubes and preserved waffles -- I'm content with my plastic bags.

When your testicles just have to be safe

Mind-reading one step closer to reality