The complete set of Calvin and Hobbes cartoons is being released as a massive hardback tome:

. This is excellent. Calvin and Hobbes is my favourite comic strip, probably followed in no particular order by The Far Side and the very early Peanuts (the collections from the 1950s). Sluggy Freelance was pretty decent until it decided to start sucking and never recovered. 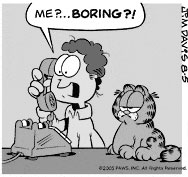 I can't decide whether it was good that Calvin and Hobbes stopped in its prime, or whether a few more years would have been nice. Two cartoons which should end immediately and unequivocally would be Garfield and the Family Circus. This opinion is rather ironic, since my family owned every single cartoon book in both series when I was a little kid. On Saturday mornings, the only cartoon I ever watched was the Garfield and Friends animated show although I hated its sister show with the barnyard animals. In retrospect, the barnyard show (there was a pig named Orson Welles or something) was probably funnier. Garfield was good for maybe three years tops, and now it's the same tired spider joke told nine million different ways. It's got a cat and sarcasm -- how can you possibly make that winning combination uninteresting? Sometimes I suspect that the creator just erases the words from old cartoons and reuses them in the daily papers. Correction: Occasionally the storyline shifts to involve Mondays, Jon getting a date, or lasagna. 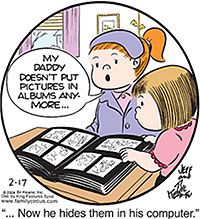 The Family Circus is just painful now, and needs a quick shotgun blast to the circle to put it out of its misery. Somewhere in the past twenty years, the thrust of the comic went from "cute things that kids say, aww how cute" to "boy you really raised some stupid and/or retarded kids". In addition, mentioning the Internet and e-mail in your comic does not automatically make your cartoon topical. If Billy was 7 in 1982 and Billy is 7 today, then he should be living in a fantasy world where e-mail does not exist. For Better or For Worse, at least, did this right. Those kids grew up over the years so talking about current events in the strip made sense. It's scary though, to see how much those kids have aged and realize that you yourself have aged an equal amount.

Let me just add that the Family Circus cartoon on your left is plain creepy. I don't want to know what kind of pictures Bil Keane is hiding on his computer, or how Dolly discovered them. And get that raw buffalo liver off your head, Dolly. 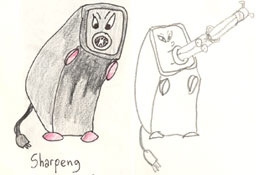 About twelve years ago, I took some summer cartooning classes at the Torpedo Factory in Old Town (this was when I still believed I could be a viable commercial artist without the ability to see reds and greens). I decided that I would create my own comic strip and invented the character, Shar Peng, the Oriental Pencil Sharpener (and his sidekick, Smudge). There were a few supporting characters, like Broccoli Man and T-Bone, and Shar Peng's nemesis was Pencilman. Like most of my projects, this comic strip died to apathy before the first story was ever written. I still have the sketchbook though, because I am a packrat of a higher magnitude. Among other unpolished gems are a sketch of a whale in jail with the caption, "Free Willy", a shadow study of a kneaded eraser which looks like nothing more than a pile of dog poop, and an Eggo waffle with wings (belonging to someone named Luft)

News flash! It was pointed out that I already wrote about how bad the Family Circus is:

. Good to see that I was able to come to the same conclusions independently even if it was a year and a half ago. Two out of two BUs agree that reading the Family Circus is not conducive to high mental reasoning skills.

2 women are killed in bizarre accident

The family said they hoped the decision would prompt the return of the body of their relative Gladys Hammond, whose remains were stolen from a churchyard.