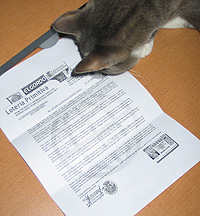 Harris complains about newspapers without actually saying anything

Tallahassee man fakes murder to get his wife to leave him