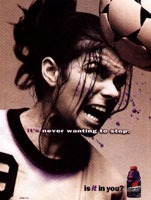 Virginians slug it out for $50 laptops

Why mom should not be your getaway driver

An innovative approach to the dating game