. Isn't that the whole point of creating the domain? Coupling this domain with a simple rule forcing adult site owners to use the suffix could be very effective. What's wrong with an Internet that keeps boobies from protruding into safe zones by having a street set aside specifically for pornography, Vin Diesel, and Ice Cube?

Some people believe that creating the domain will legitimize pornography, which is just silly. Whether the domain is there or not, it's a simple fact that adult content makes up a very large and visible portion of the Internet. Even the URI! Zone, for all its harmless trappings and fun colours, is really a very peculiar fetish site (you freaks). If all the dirty pictures were rounded up and corralled into the new domain, it would be that much easier for people to avoid it, and my visitors would no longer accidentally fall into a porn puddle by going to www.uridomain.com instead.

I'm sure one of the groups grumbling about the new domain is the Internet filtering industry. If adult sites were clearly identified by the xxx suffix, their already useless parental-filter software would become obsolete, and they would have no further excuses for blocking sites with legitimate content that's politically on the wrong side of the fence. Do people even use or trust filtering software anymore? I have a feeling that the only person standing in line to buy the next version of CyberNanny will be Jude Law, and then only because he has misconceptions about what the software actually does 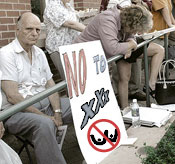 In other news, the residents of Herndon

Today I present A Whirlwind Tour of Music II: Highlights of Western Music at work. Wish me luck.

The bomb is in the baby!

Because, so far as we can tell, everything he's created for TV has failed -- except, of course, the interesting pregnancy story line on ABC's "Alias" -- Ben Affleck is "in talks" to write a new drama series.

Yesterday's search terms:
oysters that climb trees in the caribbean, moulin rouge midis, my wife and me havine fun, septic tanks and tapeworms