Looking Forward to Being Attacked 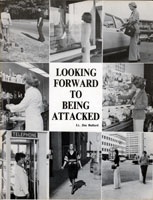 Looking Forward to Being Attacked is a light-hearted self-defense manual for women, written by Police Lieutenant Jim Bullard in 1977. The book is in black and white with about 90 pages, and can still be found on Amazon

(God bless Amazon). The goal of the manual is to change the mindset of women as victims, providing them with simple self-defense techniques to thwart would-be attackers, molesters, and burglars. 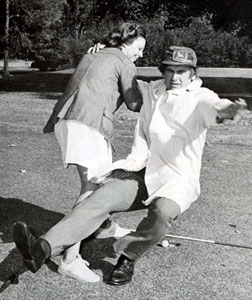 For example, if you are accosted by your local supermarket butcher at the golf course and he's wearing a John Deere hat, there are a few easy tricks you can use to keep him from mugging you from behind. Simply grab the arm that's choking you, take a step forward to the left, and swing him around to your right. Based on the illustration, your attacker will end up with a golf ball up his butt and you can continue on to the eighth hole in peace. 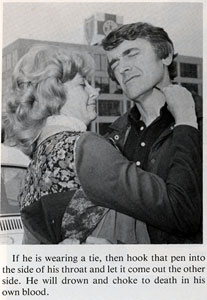 Of course, some situations may result in injury or death, so knocking the attacker on his ass might not be enough. In those cases, you have to create weapons out of the things in your purse, like a set of car keys, a ballpoint pen, or a Chinese ninja star. As Mr. Bullard says,

Killing him in the most efficient manner can be done with your fingertips, but it is really more efficiently done with one of those weapons you conceal about your person every day: a ball point pen, nail file, rattail comb, car keys, toothbrush, and possibly a hand ax (a hand ax, dagger, or sword are more efficient weapons than a ball point pen, but if you walk around town with a hand ax, dagger, or sword in your hand, you'll never be attacked).

I tried this advice out myself with all of the above except the rattail comb, because I do not have a rattail, and if I did, why would I comb it? And don't even get me started on where I conceal my toothbrush on trips to the mall -- I don't even own a purse. Using just the car keys, I managed to kill four attackers, and deterred a fifth who was getting too fresh for his own good. I also tried the sword once, but I had to don a cloak and my Boots of Escaping to blend in. I don't think it's as effective, because you really need to be somewhere like a Renaissance Fair or you will cause a panic, and this means that your attacker will also have a sword, or maybe even a Lightning Bolt spell. Lightning bolt! 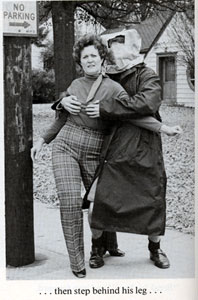 Of course I couldn't effectively talk about this book on the URI! Zone without mentioning the example on the right. If Carlos Adolfo Dominguez should approach you with a bag on his head while you are waiting for the bus to go to the movies, and he places his hands on your boobies, a quick sidestep and lean will leave Carlos wishing he'd gone to the discotheque instead.

After the step-by-step section on defusing hostile situations, there are some text-only chapters such as "Putting the Old Spark Back in Your Obscene Telephone Calls", and "Don't Shoot the Peeping Tom, He May Be Your Next Door Neighbor!". All in all, this is a very effective use for your ten bucks, and I highly recommend it.

I found this book in a box at my parent's house, so it probably belonged to my mom at some point. I requisitioned it for my coffee table shelf as a fun conversation piece at parties (I throw excellent parties, apparently). When I get to the age where I actually eat meals at a real table rather than the coffee table, my "entertaining" coffee table will be strewn with books such as these, and NOT dull books with pictures of windmills and waterfalls. My feeling is that if you're entertaining guests and they have nothing better to do than look at pictures of China or babies with flower petals accentuating their opium-induced empty smiles, you're not doing a very good job of hosting. However, a manual such as this provides hours of entertainment, especially if you liqour the crowd up and get them to practice the moves in the book.