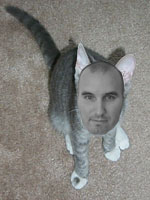 I've brought Pocket Scrabble in case we're bored. The only problem is I won't have any pockets to put it in

Pranks of people with too much time on their hands

Lost: What's in the hatch? (no spoilers)