I would say that Monday's 137 visitors counts as a Grand Opening success. People seem to enjoy my new style of updates, so I will continue in the same vein for the forseeable future. To horribly mangle one emailer's thoughts for the purposes of amusing yet inaccurate paraphrasing, my site bleeds sarcasm like a Ham and Cheese Hot Pocket left in the microwave for six minutes too long. The original sentence was "[you have] become increasingly sarcastic in your 25 years". Lame.

I also received several e-mails from people who have been around since the beginning, nine long years ago, when the URI! Domain was a single HTML page and I was being seduced on all sides by website talent scouts promising me Internet fame in exchange for "showing off my llama", as it were. One such missive was a note from my good friend, Holden, who's currently working at a company called Ziclix (see figure on the right). Please excuse the lack of punctuation in the subject -- since he was talking to my computer, it should have been "You, computer, are INFECTED", but Holden has never been great with all that grammar stuff.

Now anyone who has been on the "Information Superhighway" (sometimes called "The World Wide Web", or "Pop" in the Midwest) for more than a few years knows that spywire is a horrible nuisance. Left unattended, a spywire-infected computer can become an anchor point for KGB agents rappelling off the roof and into your office. This is not good for business. As a public service, I decided to download the award-winning Anti-Spywire software and do some benchmarks for the good of all my readers. I diligently followed the link in the e-mail and downloaded the "ho" edition of their software (though truthfully, I have always considered myself more of a pimp). 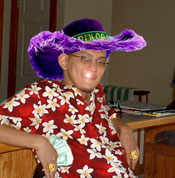 Installation is very straightforward if you follow the READYOU.TXT. After disabling your Antivirus and Internet Firewall, a double-click on the Installer loads everything up quickly to the default directory. There is an activation step at the end where you have to enter your bank's routing number as confirmation that you are who you say you are, which I think is a much better way to go over biometrics (since it means thugs will be less likely to want to chop off my fingers. You really have to prioritize which digits are more important to you).

To test the efficacy of the software, I sent personal invitations to Matthew Broderick and Jennifer Garner. Matthew, best known for his role as the live-action Inspector Gadget, declined and pointed out that Inspector Gadget does not need wire and would be able to infiltrate any secure office with only his helicopter hat. He recommended I try the "hot girls" from the episode of Fear Factor where they had to walk on a wire between two buildings. I bet the "ho" edition was tailor-made for people of their ilk, but as far as I know, none of them have ever played spies on TV. Jennifer, the actress behind Sydney Bristow on Alias also declined, saying that she can no longer do stunt work while spawn d'Affleck is leasing her womb, especially now that the bulbous protrusion has become a plot device for the next season of her show.

With no other star power in line and a deadline fast approaching, I put Booty on a zip wire with a listening device in her ear and sent her hurtling towards the computer. Before we even had a chance to go "radio-silent", Booty had wiggled out of her harness and abandoned ship, evidently very unnerved by the Anti-spywire software.

Final Recommendation: The software must really work as advertised. And since it also repels Booty, they should really market it as an anti-porn filter too.

PimpHats.com: for all your pimping and monsta bling needs