In the 1992 - 1993 school year, I was a 13-year-old 9th grader in my last year at Hammond Junior High. After years of lagging behind my social peers, I finally held some illusive level of popularity and kids that would follow my lead, especially in band. I was not a kid that I would want to hang out with today, and definitely treated some people nastily until confronted with my own meanness as the year went on. I like to think I greatly improved after that turning point!

A typical day started out with an Early Bird session of Mr. Bonfanti's World English class, most of which was spent taking word-by-word dictation of study notes about Gilgamesh. From there, we went to band, where a new band director had taken over for the beloved, retiring Mr. Randall. We kept a running count of how often she lost control of the group, shouted, or threw a music stand which exceeded 100 by the end of the year. Most of my other classes were not that memorable, although I remember that my gym teacher, Ms. Lemley, was pregnant and unable to navigate the stairs to the gym. Towards the end of her pregnancy, we sat in a classroom watching Candyman instead (definitely not an appropriate selection for public school ninth graders, with nary a permission slip in sight). I remember having fun in Chemistry class, although I thought it was weird that Mr. Wargowsky kept trying to teach me the chemical equation for converting an imaginary element, masturbium, into masturbate.

Ninth grade was also the final year of my Eagle Scout work. Frantic to get me to Eagle before my interest waned, my dad had me on a rigorous "2 merit badges per month" schedule during which I learned almost nothing about each badge. My Eagle Project involved erosion control and clean-up at the Dora Kelly Nature Park (all traces of which had vanished to nature the last time I visited in 2008), where my volunteers met the minimum requirements by working exactly 100 hours and 5 minutes. Flipping through my project write-up, I see that I requested lumber donations from Hechinger's and they never replied (probably why they went out of business). I also requested rebar donations from the Nature Park which they granted but never delivered. I ended up earning Eagle in January 1993, with the infamous Court of Honor in June.

In my free time, I was playing games on our new CD-ROM 2X Speed drive like 7th Guest, Return to Zork, and Sam and Max Hit the Road. I was reading lots of Gordon Korman and Ellen Raskin, and listening to my Dances with Wolves soundtrack on repeat (having not found any popular music worth listening to yet). I also continued excelling at playing the cornet with minimal actual practice time. My dad was getting back into playing the tuba at the time, so as a family activity we joined the Alexandria Citizens' Band, whose median age was roughly 142. Under the direction of Fritz Velke, I got to play last chair under a bunch of old guys that hadn't practiced since the Bay of Pigs and my sister got to play her oboe while being creepily stared at by the first clarinetist.

The end of the school year also brought the unnecessary drama of Freshman Prom (or "Banquet" as it was called by old people). I took a step outside my comfort zone by asking a cute girl from the other junior high who I had met through Crew and she said yes. Unbeknownst to me, people in my extended friend group were conspiring to set me up with someone else from that junior high, assuming that I'd never get a date on my own. Since the other girl assumed that these machinations were originating from me, it came as a shock when she asked and I had to say no. I suddenly found myself in a reality TV world where everyone at the other school was angry at my callous actions. Later, the junior high schools decided to hold their Proms on the same night, and the first girl backed out because she understandably wanted to hang out with her friends that she already knew. Then, the water tower broke. 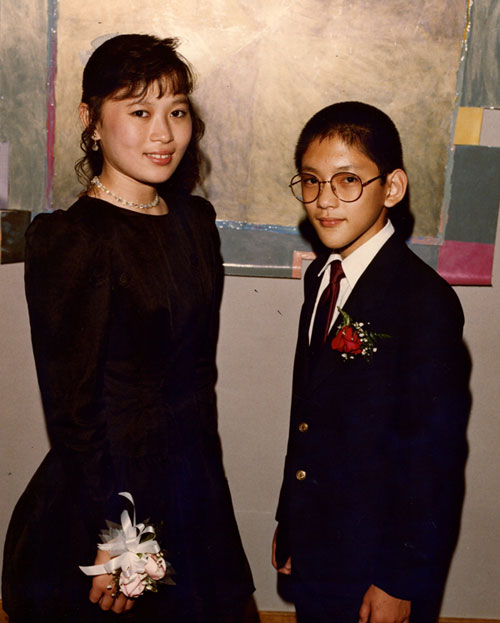 I ultimately went with Rachel, a girl from my school who liked me to some extent, but I probably did not do a great job at hiding my disappointment about way things worked out. Like all puberty problems, this experience was dramatically scarring for a few more years until it wasn't.