1982 was another year from which I retain no memories of my own -- the first dribs and drabs of events I still have today don't start until 1983. According to my parents, my sister spent a good chunk of this year sick and in Children's Hospital, so there wasn't much leeway for entertaining me in the nature I had grown accustomed to.

My parents recall that I was good with puzzles very early on, and could even piece together a puzzle flipped upside down so the picture was not visible. This intelligence was also demonstrated in an earlier test at the pediatrician's, where they wanted to see if I could put a raisin in a bottle and just ended up eating the raisin.

After turning 3 in September 1982, my parents toted me along to see the government bureaucrat responsible for slowly processing my naturalization paperwork. According to legend, he had a thick Southern accent and kept reciting my name as "Brianhh" while he leafed through tall stacks of forms. After a minute of this, I piped up from the corner of the room where I was playing to say, "Not Brianhh, Bri-IN. Bee. Are. Eye. IN!" This confirmation that I was a future STEM contributor led to the office finding my paperwork more quickly than expected.

I still retain my naturalization certificate because it functions in place of a birth certificate (I was probably born in Kenya). Every six months when I have to renew my military cards for work, I get to tote the big certificate around to bewildered government employees that don't know what it is and just want to stamp out a new ID card before lunch -- to them, I am an "edge case".

The picture below was taken late in 1982 in our upstairs living room, which mostly sat unused except at Christmas time. We had a fireplace there that we were never allowed to use because of a structural fault in the chimney that apparently sent smoke back into the house. I also continued to wear that sweater with the wildlife on the front well into kindergarten three years later. 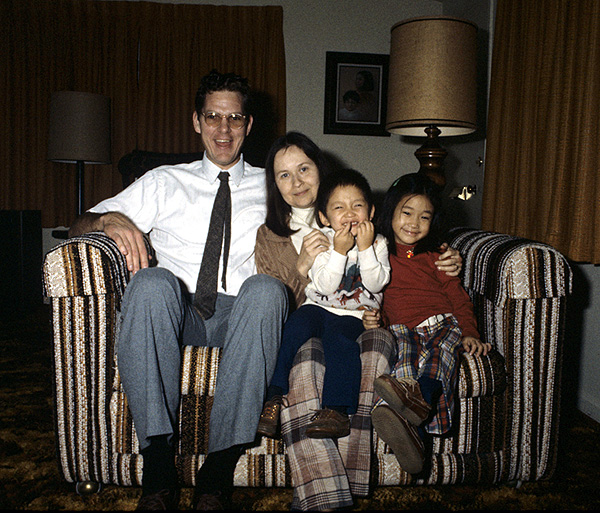