The second half of first grade (at the age of 6 going on 7) was an obliviously happy time. My closest friend was Jason McCabe (in the camo shirt in the front row, below) who lived in Brookville and came over to play with bulk quantities of cheap army men (with no moveable joints) in the dirt pile by my house. As a northern exposure location, it never got enough sun for plants to grow, so it remained a place to dig holes and stage large-scale strategic encounters. Sometimes, Jason would spend the night and we would take baths and sing the theme song from GI Joe (but with all of the verbs replaced by some conjugation of "burp", in an arrangement called "The Real American Burper"). I don't know what happened to the other students in the class, but I hope that the little blond boy on my left got an acting job as a hillbilly meth addict on Justified later in life. 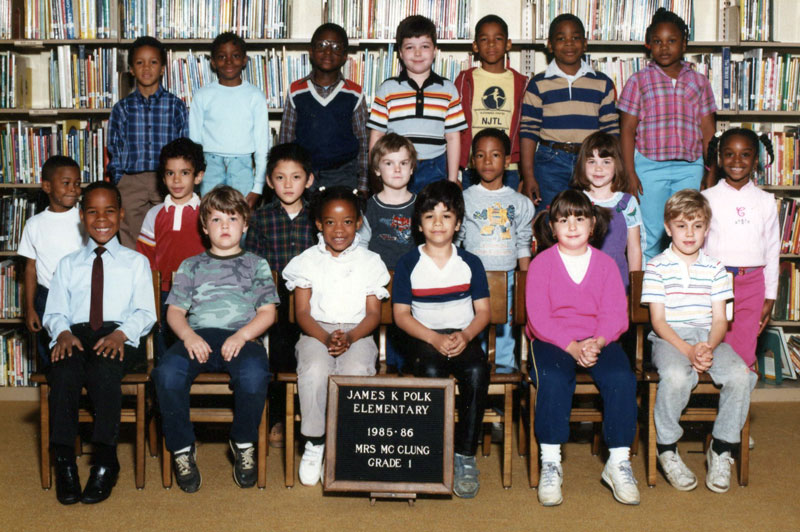 We briefly had a little grey cat named Cindy around this time but it only lasted a few months before my dad got rid of it for poking holes in our leather furniture and peeing on chairs. My parents had dogs before I was born, but the cat was my first pet, and the reason I keep cats today.

At school, we learned typical first grader stuff, such as "Citizenship in the Community" which facilitated democracy through toy sharing. As the year went on, I spent more and more time in the 2nd grade class of Ms. Uhler, the nicest teacher at the school who had cred for living in a house right next to the school. I would learn to be a good citizen in 1st grade and then walk alone to Ms. Uhler's for language arts and math. I remember getting scared of my first math class because it involved subtraction of double-digit numbers and I had not yet learned how to carry the 1. I also learned about homophones. 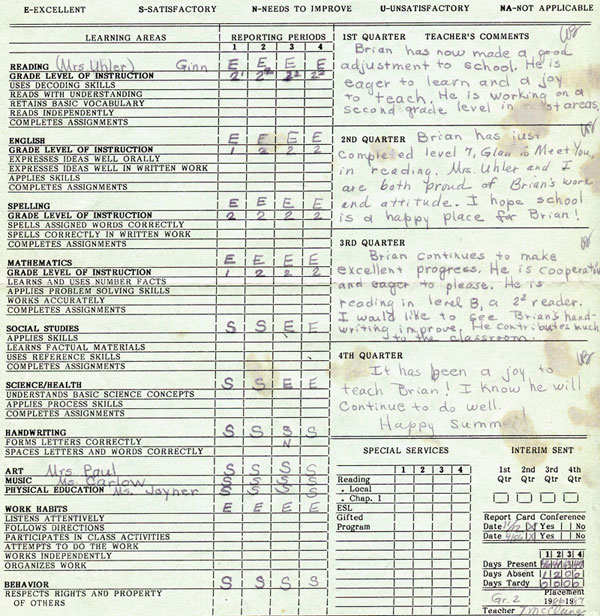 In the fall of 1986, I started 2nd grade in Mrs. Tutt's class, where I learned about Christopher Columbus and made a paper mache bowl for Columbus Day while going across the hall to Mrs. Quinn's for the SAT-ready skills. I bounced around the hallway like Desmond without his Constant until the administration made the executive decision to promote me to third grade early.

By the end of October, I was in Mrs. Hutt's third grade class. This was always a pretty traumatic transition in my history as I chose to remember it and had a direct impact in the type of person I ultimately evolved into. Leaving 2nd grade before friend groups had really formed and entering 3rd where cliques were calcifying like the tap water in a beach house made it difficult for me to make close friends. This transition wasn't helped by the fact that Mrs. Hutt had an unusual dislike for me, possibly because I pushed her class size up to 21 kids. My introduction to the class on the first day was exactly like this, and it was immediately followed by a set-up-to-fail situation where I had to measure the bottom of a milk carton and she made fun of me for not knowing how millimeters worked. Later, a student lost his dollar bill and she made me empty out my pockets, never convinced that I hadn't stolen it.

Luckily, I continued in Mrs. Quinn's class for language arts, where I started making friends with kids who had no teacher-driven notions of who I was. This core group, including kids like Jennie and Mike Buns, would end up sticking together up through junior high school.

At home, I was playing all of the Zork games, occasionally getting stuck. I enjoyed drawing and dinosaurs, and could correctly categorize dinosaurs into the appropriate eras.