In 1984, I continued to live in the weekdaily care of our babysitter, Rosa. During the hours when my sister and Rosa's sons were in school, I had sit in a room with the door closed and the TV on to such gems as The 700 Club. I got in trouble if I changed the channel or made too much noise, but occupied most of my time with large brown bags of He-Man and Transformer (Generation 1) action figures brought from home. My action figures made me popular with the other kids that Rosa babysat in the afternoons, although one of them named Rashaad tried to steal a Transformer that turned into a bird from a cassette tape by hiding it under a bed until he could reclaim it later. I also got my earliest scar at Rosa's, when I sliced open the back of my thumb on a disposable razor in the bathroom.

At home, I had a He-Man bicycle (to go with the He-Man sword and shield I'd received for Christmas in '83) and rode it up and down the street constantly. It had plastic wheels and I spent hours skidding to a halt on the sidewalk, leaving trails of shredded plastic until my dad yelled at me for making a mess. Besides He-Man and Transformers, my favourite cartoon was Inspector Gadget, and I had a Cabbage Patch Kid solely because my sister had several.

I had not gotten into Legos yet, but I had a healthy collection of CONSTRUX!, which were the economy version of Legos in the early 80s. I always had to deconstruct my creations before going to bed (because all toys must be picked up and put away) and one time I had a massive tantrum where I threw my CONSTRUX! creation at the pine wood dresser in my bedroom. This dresser currently lives with my sister in Rhode Island, and the battle scars are still there.

In the fall at the age of 4 going on 5, I started kindergarten at William Ramsey Elementary School under the kind eyes of Ms. Lovo and Mrs. Wheatley. (I didn't realize that preschool was a thing until people later in life asked me why I didn't attend). I made rapid friends with a boy named Yunus from Turkey, a fellow adoptee named Gina, and another girl named Gigi. I've been told that Yunus and I would take charge of the sandbox, but I don't really remember this. 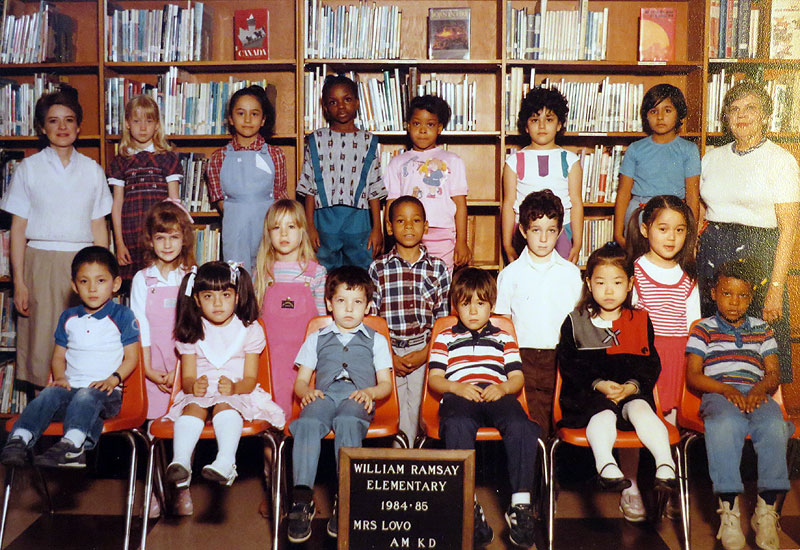 I do remember taking field trips to the attached Dora Kelly Nature Center to see the bees fly in and out of their hive and being disappointed with the selection of reading materials available in class. I had a reader, Birds Fly, Bears Don't, intended for first graders and I had completed it by the end of the second quarter.

Above is a picture of my sister, Gina, myself, Yunus, and his sister, taken in our backyard. Gina once wrote me a letter saying "I love you" so I replied in turn with the same. My family made fun of me and my "new girlfriend" until I had yet another tantrum and tore up the letter.