three-time winner of the BUlitzer Prize

♠ Last weekend, we had an impromptu Labor Day picnic where Rebecca got a great deal (Buy One, Get One Free) on melons. We grilled giant ribeye steaks and floundered around the backyard playing badminton until it was too dark to see. This weekend, my parents are giving me a birthday dinner with ribs on Sunday afternoon, to celebrate my continuing adulthood and the fact that I wasn't eaten by predators or run over on the highway as a child.

♠ There was a time when I could wake up solely to the tinny beep of my watch alarm. As the inexorable trek to Age 29 progresses, I'm finding that I usually don't wake up until the annoying backup alarm goes off. Unfortunately, this alarm has the same sound as every stock TV alarm sound in the sound effects library, which puts me in a brief panic whenever one goes off in a TV show. I blame my reduction in hearing on all those years of loud student recitals and classical music concerts. 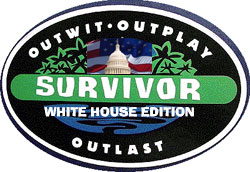 ♠ The election rigmarole would make for better television fodder if it were a Survivor-branded reality show, although I think Obama could stand on one foot on a coconut longer than McCain. Ratings would also soar when they put Palin in a swimsuit during primetime.

♠ Forget the possibility of a black guy or a woman in, on, or around the White House -- the historic moment of this Election will definitely be the moment the acronym VPilf was born.

♠ Just remember, if you're undecided on the day you go to the polls, Vote for BU! The electronic voting machines will lose your vote anyhow, so why not throw it away?

Sleight of hand and sense of self

Huge spider hangs over city block, waiting for Mike to walk by