It was 1934, April 2, 2:34. He'd just come from collecting bugs from a canyon. In his laboratory (the garage), Professor Howl was experimenting with the dead ladybugs he'd dug up.

He found that they held evidence of time, and electricity. With this he could make a time machine!!! He copied the plans very carefully.

He got in and checked it (and of course it wasn't running). When the cat came and spilled some muriatic acid into the hole the machine sped to life..... 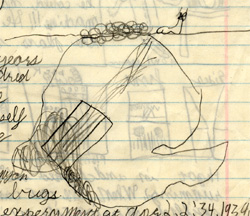 It drove to 'Stone Age'. The cavemen thought the machine was an Evil Spirit so they threw it into a canyon.

Three hundred years later, the mirror self of Mike came to that canyon to find bugs for an experiment at Apr. 2, 2:34, 1934. It was the same as the beginning. Mike was making a time machine! Soon the canyon will be filled with machines!!!

Iron Maiden to the rescue