♠ The URI! Zone saw a sharp uptick in page views (exactly 222) on Tuesday when I happened to link to the story about cheerleaders taking off their skimpy outfits and putting on something more modest. I need no further proof than that to confirm that you all are perverts and that boobies run the Internet. 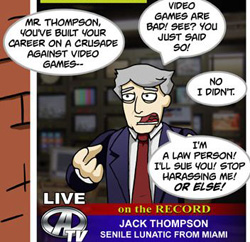 ♠ On the plus side, my naked dancing cheerleader web games wouldn't get sued by Jack Thompson, the crazy conservative lawyer who tried to tie every school shooting to violent video games, since he was just disbarred in the state of Florida. Good riddance.

♠ It's too bad that you can't disbar a senator (without a two-thirds majority). Think how much more efficiently the election and the economy talks would proceed if John McCain weren't in there being old and such.

♠ I AM looking forward to and/or dreading the upcoming Vice Presidential Debate based on the fact that Sarah Palin's interviews are so awkwardly embarrassing and uncomfortable, that I imagine that the Debate will be like watching an episode of The Office. I recommend that Steve Carell be the moderator.

♠ This weekend, we'll be taking a weekend trip up to Bethany Beach to relax, although the tropical storm and gas shortages are just a little intimidating. Should I get stuck up there without any gas, I plan to unilaterally withdraw from updating this website or going to work until the economy is in a better position.

Teens break pelvises after lying under a car as a prank