the Rosetta Stone of blogging bridges 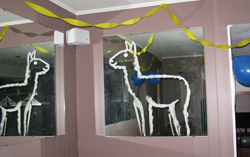 ♠ My birthday week has drawn to a close in a fairly predictable fashion -- everyone I went to high school with boggles at the fact that I'm still in my twenties, and everyone else says something along the lines of "Well, 29 may have been low-key but next year you'll be THIRTY!" Twenty-nine was pretty nice as greengrocer birthday's go -- my woman made me cake, I played Pin the Tail on the Llama, and had a four-day work week.

♠ Also on my birthday, Ryan Christopher Wright, 4th son of Jen (Anna's eldest sister) and Lloyd Wright, was born. I don't have any pictures to share, but I'm guessing that since his name is so much like mine, he also looks like me -- small, debonair, and Asian. Congratulations!

♠ Babies are like cicadas, but on a much shorter swarming span, especially in the Catholic parts of the country. I should make my next contest be a guessing match on who will have their first child next. (Smart money would be on Kathy and Kelley Corbett until you realize that Kelley would be raising it).

♠ Speaking of raising it, I will be playing poker this weekend inside the Beltway and winning all the money. It's only fair since I always lose in Sterling this year.

♠ I've been driving on the Beltway a bit more than normal these past few weeks and have noticed a disturbing trend -- an increase in shifting lanes (which are not just how earthquakes get to work). Because of all the idiotic work to build lanes that will tax yuppies in a hurry, the normally straight-arrow Beltway winds around Jersey barriers and parked construction machinery. And because 85% of Beltway drivers are on their phones and somehow lack the driving experience of even a very bent golf club, the twisty lanes are marked with solid white lines. 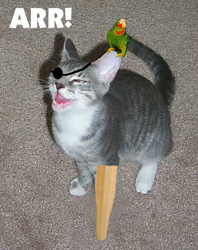 ♠ In most areas of the US, unbroken white lines are the symbol for places on the road where you're not allowed to change lanes. Because this is so blatantly un-American (we have the right to choose our own lanes!), most drivers just ignore them. I'm guessing they could have saved some money by leaving the white lines dotted, but there'd probably be an increase in accidents. This could be offset by making a yellow warning sign with squiggly lines representing shifting lanes, but at the end of the day the costs are probably about the same. It's six of one or half a dozen of the other.

♠ "Six of one or half a dozen of the other" is probably the worst English idiom there is. Why waste a dozen syllables to say this, when an equivalent phrase like "It's two of one or a pair of another" is so much easier to say? Unless you're specifically talking about eggs or doughnuts, things that naturally occur in dozens, do your listener a favour and simply say, "Well, they're quite similar" next time.

♠ Have a great weekend working on the Name That Tune contest! Don't forget to TALK LIKE A PIRATE today!

Why my sperm is so healthy